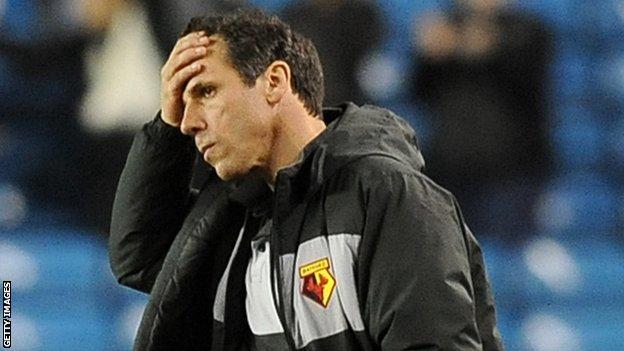 The Hornets' hopes of a top-two Championship finish have diminished after a run of one win in seven games.

"It was one of the best games we played. Especially in the first half," Zola told BBC Three Counties Radio.

From sublime to sloppy

After winning 18 of 29 Championship matches, Watford have secured just one victory in their last seven

"If we play like this, in the way we are looking for, we will achieve something this year."

Watford missed the chance to close the gap on second-placed Hull, who lost at Wolves, and are now six points adrift with three games to play.

It looks increasingly likely the Hertfordshire side will have to go through the play-offs if they are to earn a place in the Premier League.

"We need to finish in proper way," continued Zola. "I'm looking for us to finish well and prepare properly for the play-offs, if that's what it happens to be."

But the former Chelsea and Italy striker believed his side were denied two penalties at the Den, one for a handball in the area and another for a collision between Troy Deeney and Danny Shittu.

"I don't want to look like I'm always complaining but there were a couple of penalties that weren't given and it's not the first time we've been penalised," he said.

"It's a shame because you play so well and you don't get what you deserve and its frustrating."