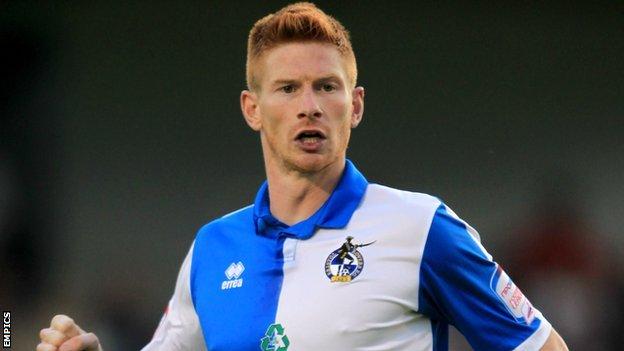 Bristol Rovers striker Matt Harrold has signed a new one-year deal, with the option of a further season.

He has missed the majority of the current campaign after damaging his knee ligaments in September, and has yet to feature under boss John Ward.

"Matt is a player I have known about, even though I've not worked with him in the past," Ward told the club website.

"He is at a really good stage of his recovery and is forever pestering me to give him a game.

"Matt has been out with a long-term injury and that can be quite depressing for any player, but he's kept himself involved and he collects the club fines, so he's been a nuisance to the players as well as me.

"Even though he's not played since I arrived he's been an important, and integral, part of the group that has gone out and represented this football club and he has represented it the best he can even, though he's not been able to get his boots on."

Former Southend and Yeovil forward Harrold joins defender Michael Smith in committing to the Memorial Stadium outfit for next season.