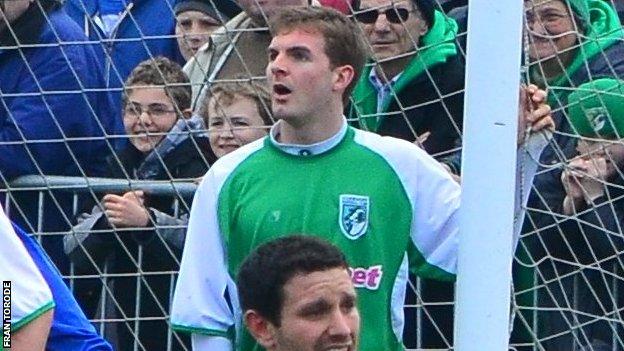 Guernsey FC conceded a last-minute equaliser as they drew 2-2 at Badshot Lea in the Combined Counties Premier Division on Thursday night.

Guernsey could have won it in stoppage-time but Nigel Hutton's shot was ajudged not to have crossed the line.

Matt Loaring put the islanders 2-1 up with 10 minutes to go before Badshot got their dramatic late leveller.

"It was kind of like a defeat really," boss Tony Vance told BBC Guernsey.

"The boys worked so hard and pretty much, apart from the first 20 minutes were in control of the game.

"But I'm very pleased and proud with the effort they put in."

The game was the ninth of a

They are still third in the table and did not lose ground on leaders Egham Town as they drew 4-4 at South Park.

And while Vance said his players were exhausted after Tuesday's loss, he felt they were much better at Badshot.

"On Tuesday I thought we looked tired and flat but at Badshot the guys really put a shift in and deserved the three points," he commented.

"We're in a situation where we have to grind out results and there's a huge group of players here dedicated to getting results.

"Words can't describe what they're giving to the side and their island."