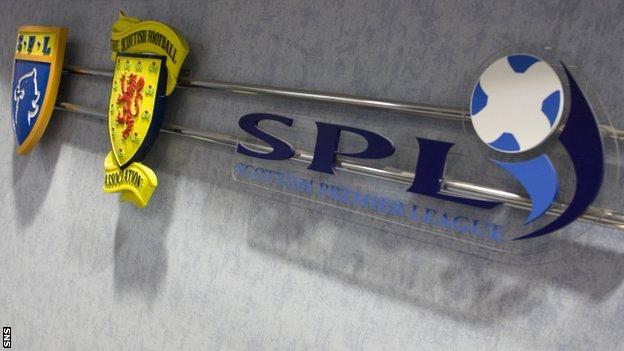 The Scottish FA is "prepared to get involved and act in the best interests of the national game" after league restructuring proposals were rejected.

"The SFA urges the league bodies to embrace the positive aspects of change now, or to formalise their request for external assistance," said the SFA.

Ross County and St Mirren opposed 12-12-18, which was proposed for next season and would involve the top two divisions splitting into three leagues of eight midway through the season.

A revised financial distribution and the merging of the SPL and SFL were included in the plans.

The SFA cited the "acrimony and rancour" following Monday's SPL vote and urged clubs to "uphold the value of mutual respect".

"It should be remembered that 10 out of 12 top-flight clubs voted in favour of change," said the governing body.

"It is with this in mind that the Scottish FA reiterates its commitment to restructuring on the five principles of a single league body, fairer financial distribution, introduction of play-offs, parachute payments and a pyramid below the third division.

"The governing body calls on both the Scottish Premier League and the Scottish Football League to re-affirm their commitment to the five principles.

"We are aware of public comments from club chairmen from both the SPL and SFL inviting the Scottish FA to intervene to find a solution.

"The Scottish FA's rules - and the respective rule books of the league bodies - do not allow for the governing body, or any external body, to 'take control' of a separate company in possession of commercial contracts worth millions of pounds.

"However, if it truly is the will of the clubs, the Scottish FA is prepared to get involved and act in the best interests of the national game.

"This will require a mandate to the Scottish FA from both the Scottish Premier League and the Scottish Football League, so that positive changes to improve Scottish football's future can be proposed without the threat of legal recourse or judicial review."