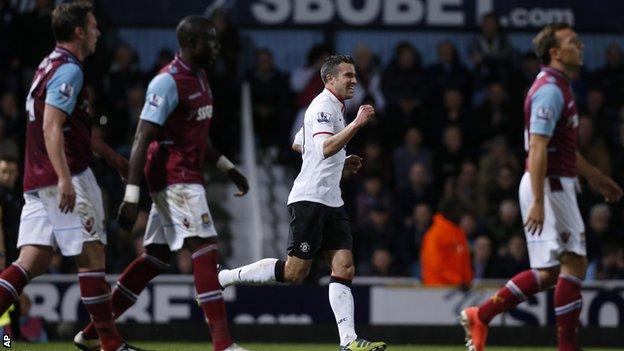 With Van Persie offside for United's second, Allardyce fumed: "We had a fabulous win taken away from us."

We had a fabulous win taken away from us by an assistant referee. It was blatantly offside, as we can all see

His anger was echoed by United boss Sir Alex Ferguson, who was upset Andy Carroll was not sent off for a challenge on keeper David De Gea.

Carroll had thrown himself into an aerial challenge with the keeper as he attempted to reach a corner at the end of the first half, leaving both the Spaniard and defender Patrice Evra needing treatment.

"The referee did see it but didn't see it as a red card," Ferguson added. "He saw that incident and chose not to give him a red card."

Allardyce was quick to contradict Ferguson.

"I think it is a yellow card at most because Andy has committed to try for the header and you can't stop dead," he said.

"When you commit on a corner and you start off running, you can't stop dead even though you aren't going to get it.

"Your Highway Code will tell you that when you travel at 60mph it will take 300 yards to stop, so when Andy's travelling at 15mph…"

That incident came after United's Antonio Valencia had cancelled out Ricardo Vaz Te's 15th-minute opener for the Hammers.

Mohamed Diame then fired West Ham in front again before Van Persie's 77th-minute strike sealed a point for the visitors.

Television replays showed he was in an offside position when a Shinji Kagawa shot hit both posts and bounced out to him.

"It was blatantly offside, as we can all see," said Allardyce, who was unhappy with the assistant referee.

"It's their job to give the offside decisions that appear in front of them.

"We would have been satisfied with a draw before the start but, when you see a victory against one of the best teams in Europe taken away from you, it is hard to take."

The point moved West Ham up to 11th in the Premier League table, eight points above the relegation zone.

United's lead at the top is now 13 points, after title rivals Manchester City closed the gap with a 1-0 win over Wigan.

City can reduce the deficit still further if they win their game in hand, but United, with five matches remaining, are clear favourites to finish on top.