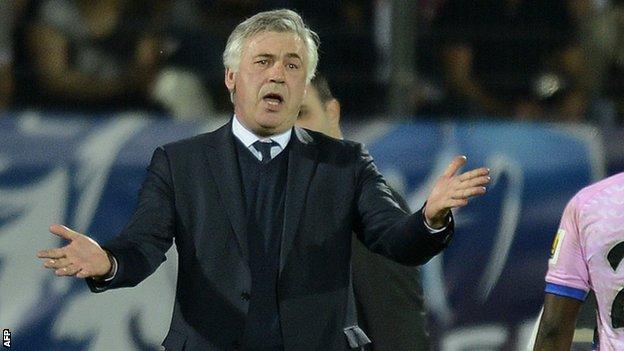 Paris St-Germain have been knocked out in the French Cup quarter-finals on penalties after two of their star summer signings missed against Evian.

Zlatan Ibrahimovic's shot was saved and Thiago Silva hit the crossbar as the league leaders lost the shootout 4-1.

Argentina midfielder Javier Pastore's opener for PSG had been levelled by Saber Khelifa in normal time.

In France, David Beckham started the move that led to PSG's early strike with a trademark long ball to pick out Christophe Jallet. The rampaging full-back centred to Pastore, who sent a powerful half-volley off the crossbar and into the net.

Carlo Ancelotti's side were pegged back a minute before half-time as Khelifa tapped in unopposed, and PSG midfielder Thiago Motta was red-carded deep into extra time.

Relegation-threatened Evian will meet Lorient in the last four of the competition, while Bordeaux, who beat second division Lens 3-2 on Thursday night, will play Troyes.

Meanwhile, Roma edged a thrilling second leg at Inter to progress in the Italian Cup. Striker Mattia Destro scored twice against his former club before defender Vasilis Torosidis stroked in a stunning long-range lob to seal a 3-2 victory at the San Siro.

Stuttgart will meet all-conquering Bayern Munich in the final of the German Cup after they beat fellow Bundesliga side Freiburg 2-1 thanks to first-half goals from defender Arthur Boka and attacker Martin Harnik.

Bayern are bidding to become the first German club in history to claim the treble. They have already won the Bundesliga title with a record six games to spare, and will meet Barcelona in the Champions League semi-finals.