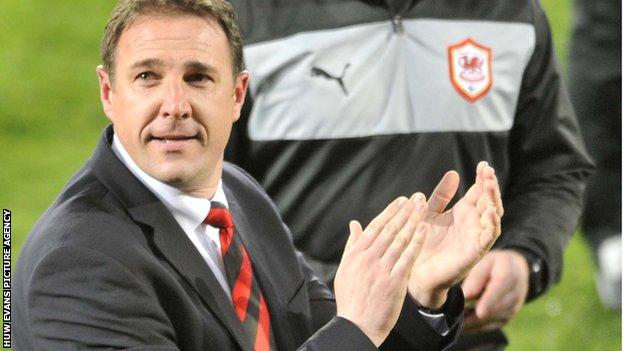 Cardiff City manager Malky Mackay has already started planning how to spend the £25m promised to strengthen the squad for the Premier League.

City secured promotion with three games to spare by drawing 0-0 with Charlton.

Mackay conceded Cardiff face a "huge challenge" to stay in England's top flight next season but has faith in his ability to adapt to the demands.

"We'll make sure the departments we've opened up at the football club and the structure we've implemented keeps striving forward.

"Change is constant and if you don't go with it, you're left behind."

As well as rebuilding the squad by signing more than 20 players in his two years in charge, Mackay has made significant changes to Cardiff's training, scouting and sports science programmes.

"We've been changing and adapting, pushing the envelope and trying to get the best practice in every avenue we've gone down," added 41-year-old Mackay.

"We'll continue that to make sure we give ourselves the best chance we can in the Premier League."

The Malaysian businessman, whose investment at the start of the season came with the condition of the club's shirts changing colour from blue to red, will now double that figure in preparation of Cardiff's debut Premier League campaign.

"This season is probably when he's gone hands on at the club," said Mackay of Tan's influence.

"In that respect there's been a lot of firsts for him in terms of learning about the game, the football club, the division and life in south Wales.

"A lot of credit has to go to him for adapting to that because he's a very successful businessman in his own part of the world. He's got his finger on the pulse over there.

"For him to come over here and give trust in me and my staff and allow me the chance to bring a group of players together I felt that could be promoted is great."

Cardiff will go up as Championship winners if they beat Burnley on Saturday.

But they could be crowned champions without kicking a ball if second-placed Hull lose at home to relegated Bristol City the night before.