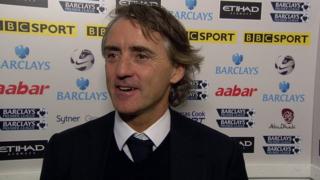 Roberto Mancini believes Manchester City struggled in their 1-0 win over Wigan because they were "tired" after Sunday's FA Cup heroics against Chelsea.

Wigan passed up two clear chances to take the lead in the space of a minute through Franco Di Santo and Arouna Kone, before Carlos Tevez scored a late winner.

The Argentine striker now has 84 goals in 196 Premier League appearances, exactly the same record as Cristiano Ronaldo has in the Premier League.