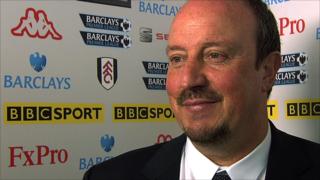 Chelsea had to show quality - Benitez

Chelsea interim boss Rafael Benitez says his side had to show their quality against Fulham to climb the Premier League table, after winning 3-0 at Craven Cottage.

A stunning David Luiz strike put the Blues ahead after 30 minutes, and skipper John Terry followed up with two headers.

The win moves Chelsea into third place in the Premier League, a point above Arsenal, but they face Benitez's former club Liverpool on Sunday.