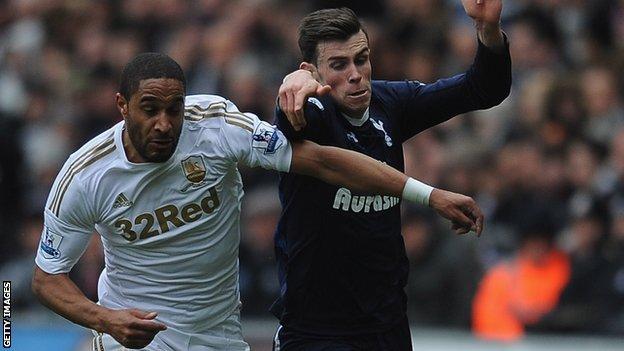 John Hartson says the resolve of Swansea City and Ashley Williams will be tested this summer if clubs make offers for the defender.

Wales captain Williams, 28, has been linked with Arsenal and Liverpool after a second impressive season in the Premier League.

"But the amount of money that comes in for these people, it's very, very difficult to turn it down," he added.

Swansea manager Michael Laudrup has previously admitted he fears he could lose the centre-half in the close season.

It's always flattering when you get linked with big clubs. It boosts your ego because all footballers have an ego

But Laudrup also said the Welsh club would have "no problem" selling their best players over the summer should the deal suit their needs, and if the players ask to leave.

Wales manager Chris Coleman has said Williams is good enough to play for one of the top four Premier League sides.

And former Wales and Arsenal striker Hartson says Williams's performances in the Premier League over the last two seasons have inevitably attracted interest.

"He's had a fine career at Swansea. He's at that age where he's very comfortable with his game and on top of his game I believe.

"It's always flattering when you get linked with big clubs. It boosts your ego because all footballers have an ego.

"You love to be linked with big clubs. I was linked with every single club in the country at one stage.

"You do enjoy being on the back pages when a club comes in for you and it tests your resolve. It's whether Ashley wants to move."

Joe Allen,Scott Sinclair and Danny Graham have been sold for a combined total of £28m during Laudrup's reign.

The Dane has suggested that players will not be kept against their will, but stressed the good of the club will always come first in any decision to sell.

Liverpool manager Brendan Rodgers is huge admirer of Williams having worked alongside side him during his two-year stint with Swansea, but Arsene Wenger has also reportedly made the defender a key transfer target.

"There's two things when a player is linked with a transfer," Hartson added.

"It all depends on the size of the bid and it will depend as well on the player."