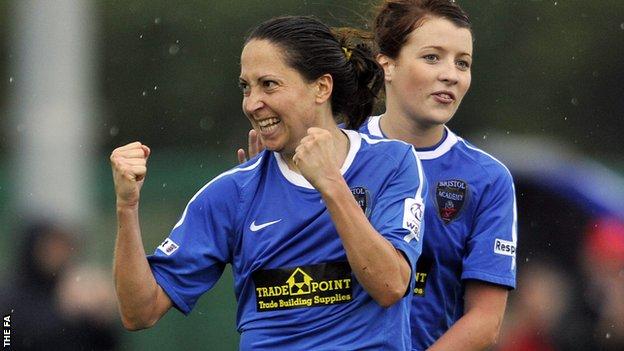 Spanish striker Laura Del Rio says the Women's Super League has the potential to be the best league in the world.

The 31-year-old is preparing for her second season at Bristol Academy, having previously played in the United States, Germany and her homeland.

And she believes that three years after its inception, the quality of the semi-professional Super League is on a par with its global counterparts.

"Every year the league here gets better and better," she told BBC West Sport.

"The players in England are getting so good. They're coming in to the game younger and they are getting faster and more technical.

It's going to be hard for the defenders to stop us. She's going to score a lot of goals, I'll make the assists.

The US has been a pioneer in the women's international game - their national team have been top of the Fifa rankings for the last five years - but that success has failed to translate to the domestic scene.

The first professional league for women, the Women's United Soccer Association, was set up in 2001 but dissolved after just two seasons because of financial difficulties.

It was reformed as Women's Professional Soccer in 2009, but two years later that too folded because of an ongoing legal battle with an ex-franchise owner.

Del Rio was playing for Philadelphia Independence when the WPS was suspended and has no regrets about moving to England.

"Last year was a really good experience and I think this year I can do even better," she said.

"I want to stay here. I know the Super League are doing really good things and I want to be involved."

Evolution of the WSL

Del Rio finished top scorer for the Vixens last year, her seven goals in 20 games helping them finish fourth in the table, but her influence can also be seen off the field.

Bristol Academy boss Mark Sampson clinched the signing of Del Rio's compatriot, Natalia, during the close season and after being dubbed the 'female Michu', she could prove to be an exciting prospect for the Super League.

And Del Rio and her fellow Spaniard showed their worth in Sunday's 3-2 win over Everton in the FA Women's Cup quarter-final - Natalia scoring twice and Del Rio netting from the penalty spot.

Del Rio is confident their partnership will continue to improve during their Super League campaign, which starts on Thursday.

"It's worked in training over the last four months, so I think it can," she added.

"It's going to be hard for the defenders to stop us. She's going to score a lot of goals, I'll make the assists."