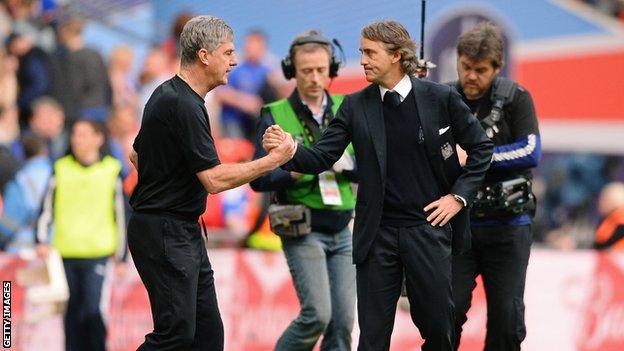 Assistant manager Brian Kidd says boss Roberto Mancini has made a significant impact at Manchester City and expects him to guide the club to more success.

The Italian ended City's 44-year wait for a league title last May, although they appear unlikely to retain their Premier League crown this term.

But they will lift a third major trophy in three seasons if they beat Wigan in next month's FA Cup final.

"What he's done in just short of four years has been fantastic," said Kidd.

He told BBC Radio Manchester: "The boss has done terrific with the way he's adapted to the Premier League and the success he's brought to Manchester City. He's put silverware on the sideboard.

"Every manager has different styles and different ways and he's not dissimilar to [Manchester United manager] Sir Alex Ferguson. He's not afraid to make big decisions, he's passionate and he can handle big players."

He's not afraid to make big decisions, he's passionate and he can handle big players

Under ex-Lazio and Inter boss Mancini, Manchester City won their first major silverware in 35 years when they won the FA Cup in 2011 and could repeat that success after booking their place in this year's final by

Despite on Wednesday and local rivals United being held to a draw at West Ham, the Red Devils still have a 13-point lead at the summit and need two wins from their remaining five fixtures to win the title.

Kidd, who played for and has coached at both Manchester clubs, rejoined City in 2009 as part of their academy set-up and was made assistant boss following Mancini's appointment as manager in December of that year.

He also had a spell coaching with the England national team as part of Sven-Goran Eriksson's backroom staff - which was cut short in 2004 when Kidd was diagnosed with prostate cancer.

"It was a just a run-of-the-mill blood test, that was all," the 63-year-old told Radio Manchester's In The Spotlight programme.

"I was with England looking forward to Euro 2004, but when I was diagnosed with that, I had the treatment for it. You put your gumshield in and you get on with it.

"I'd like to think that, when it happened to me, it brought a lot of awareness to people. Particularly lads I'd gone to school with and people in general - they looked at me and thought I was a fit lad. I know people have said they've had tests and it's raised an awareness.

"It isn't nice when you get the diagnosis, but you get on with it because there's always someone worse off than you.

"Today, we'll hear stories of terrible things happening in the world out there. I've never had this 'why me?' attitude. Why not me? That's life."

You can hear an extended interview with Brian Kidd on BBC Radio Manchester's "In The Spotlight" programme from 18:00 BST on Saturday, 20 April.

It is also available online for the subsequent seven days.