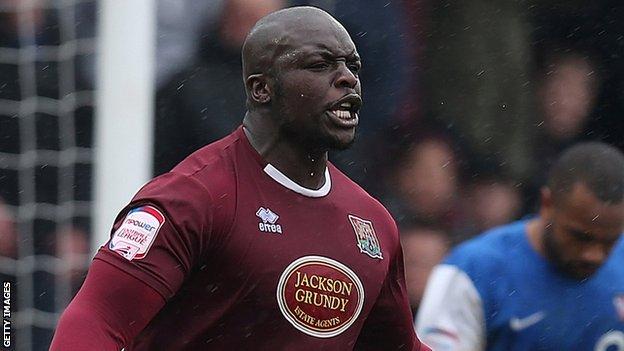 Northampton Town striker Adebayo Akinfenwa says his dry spell in front of goal is less important than the team's success this season.

The 30-year-old has not added to his 17 goals this season since the draw with AFC Wimbledon in February. The Cobblers have not scored in four matches.

Akinfenwa told BBC Radio Northampton: "If someone told me we'd go up but I didn't score again, so be it.

"We'd be worried if we weren't creating chances."

He added: "I'm not too disappointed that my goals have dried up but I do want to turn it around.

"Every striker will tell you that you go through that stage."

Northampton have fallen away from the automatic promotion places with three defeats and a draw in their last four League Two games, but competing in the play-offs would be an improvement on the 20th and 16th-place finishes in the last two seasons.

"If we don't get up automatically, we'll go for the play-offs. The fans have got to stick with us and hopefully we'll have that good day out at Wembley and finish it off with promotion.