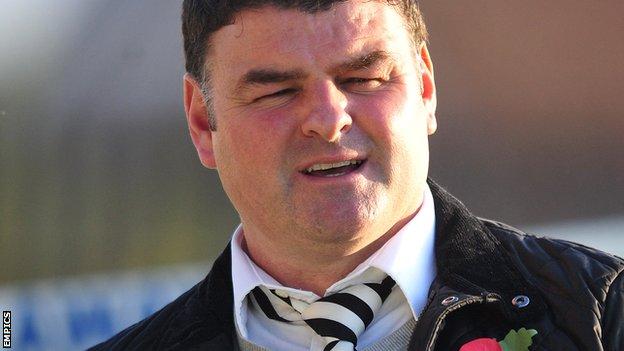 Stockport County manager Ian Bogie has not given up on his side escaping relegation despite conceding the odds are against them.

To stand any chance of staying up, they must beat title-chasing Kidderminster and hope other results go their way.

"Kidderminster will be looking to win the title against a team trying to stay in the division," said Bogie.

"The pressure's all on them. We can go there and give it everything we've got. If we perform, we'll not be far short."

2005: Relegated from League One

2010: Relegated from League One

2013: Will be relegated from Conference Premier if they fail to beat Kidderminster, although a victory still may not be enough for survival

"The odds are stacked against us massively, but stranger things have happened in football. If we believe and if we win, I firmly believe we'll stay in the division."

Tamworth, Gateshead and Lincoln could all be dragged into the bottom four if the Hatters win on Saturday, but even victory may not be enough to keep Bogie's side up.

Lincoln only need a draw at Hyde to be safe, while wins for Tamworth against Woking and Gateshead against Ebbsfleet will guarantee their respective positions in the top division of non-league football next season.

Relegation would mean County, who have struggled financially in recent seasons, would have dropped from the second tier of the English game to the sixth in the space of 11 years.