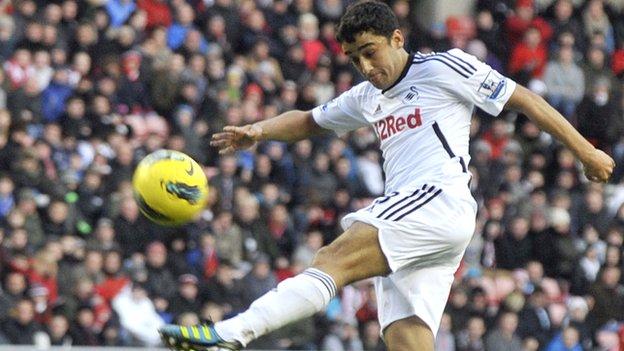 Swansea's Neil Taylor could make his return against Southampton at the Liberty Stadium on Saturday says manager Michael Laudrup.

Left-back Taylor, 24, has been out since September after breaking and dislocating his ankle against Sunderland.

His comeback continued with a full game for Swansea's development side.

"It could be this [game] or the next or the other, but we still have six games to go," Laudrup said.

"He played the whole game on Monday [for the development side]. I went to see him and I think he did well again.

"He looks well [but] of course it's another level [the Premier League].

"We'll see him before the end of the season in part of a game or at least in the squad."

Southampton have three points less than us. If we beat them we'll be six points clear of them

Wales defender Taylor has not played since breaking his ankle following a challenge with Sunderland's Craig Gardner in the Premier League match on 1 September last year.

It was initially thought that he would miss the whole of the season but the former Wrexham player's rehabilitation has progressed quicker than expected.

"I am now available for whenever the manager feels he needs me," said Taylor. "Inside every footballer there is the desire to play, but I've been very sensible with this."

Taylor's absence has led to the emergence of local teenager Ben Davies, who has made 37 appearances since Taylor's injury and won four Welsh caps.

Swansea, currently in ninth place, will be looking to end a run of four matches without a win when they face Southampton at home on Saturday.

And Laudrup said: "If we want to end in the top ten, this is a must win on Saturday.

"I believe if we win that we'll end in the top 10 and I think it's not much to ask to win this game.

"Southampton have three points less than us. If we beat them we'll be six points clear of them.

"I prefer to beat the direct rivals and not the big teams. Beating the big teams is a bonus which is a very nice and gives you a lot of publicity.

"But I prefer to beat the ones who are at the same level."