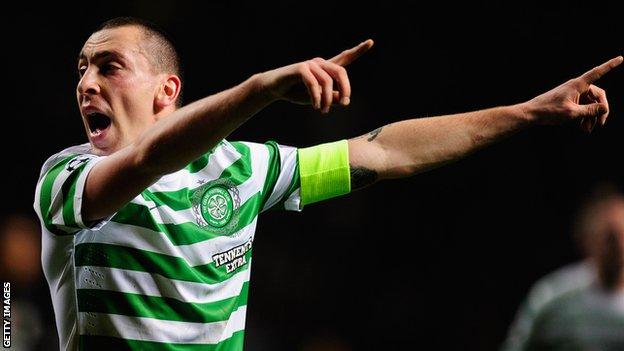 Celtic captain Scott Brown has an eye on returning to action in time for the Scottish Cup final on 26 May.

However, the 27-year-old concedes it will be difficult as he recovers from surgery on an abductor problem.

"I'm still a wee bit from training but, if everything goes well, hopefully I'll be back for the cup final (against Hibs)," said the midfielder.

"That's my target but it will be touch and go. It's going to be hard to get some game time in before it as well."

And the Glasgow side will be missing central midfielders Victor Wanyama and Beram Kayal through suspension for the end-of-season finale.

Brown has not played since mid-February but insists he has a chance of featuring again his former club in the Scottish Cup final.

"I'm feeling quite good, I've been back running," revealed the Scotland international.

"It's been four weeks since the operation now and I will take things slowly. Running in straight lines.

"I know we have a couple of lads out, but we have a big squad that can deal with that.

"It will be the manager's decision. He will see me in training in the weeks leading up to it.

"I would need to be honest as it would take a place away from someone who is 100% fit, especially with me not playing in so long.

"The next couple of weeks will be huge for me to see if I can make that push for the cup final."

Celtic need a point from Sunday's meeting with Inverness CT to wrap up the Scottish Premier League title, although the celebrations could start early if closest rivals Motherwell fail to win at Dundee United on Friday.

Brown would have preferred it if the post-split fixtures had been arranged with a match against the Steelmen and admitted the scheduling was puzzling.

"It would be a little disappointing if they [Motherwell] get beat and it's already over by Sunday," he said.

"Here's hoping they can do it and we can win it on Sunday. I would rather do that."