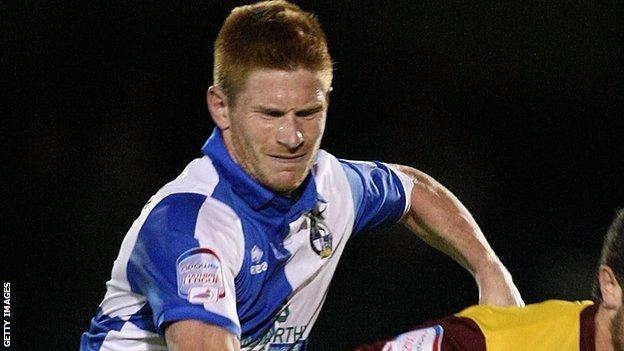 Bristol Rovers striker Matt Harrold says he is grateful to the club for offering him a new contract after an injury-hit season.

The former Shrewsbury forward finished last term as top scorer, but has been sidelined by a cruciate ligament injury since September.

He signed a new one-year deal with the Pirates on Thursday, with the option of a further year.

"I do appreciate the club standing by me," he told BBC Radio Bristol.

"I spoke to them after I got the injury and said I had a family to support, and they were great and always wanted me to stay.

"I feel stronger than I did before I got injured. I'm hungry for some success with the club and I know what a great club we can be.

Harrold was brought to the Memorial Stadium by former boss Paul Buckle in the summer of 2011, and scored 18 goals last season.

But just six games into the current campaign, during Mark McGhee's reign as manager, he suffered ligament damage and was ruled out for nine months.

He has yet to play under new boss John Ward, but the Pirates manager said Harrold had been "pestering" him for a chance to play before the season ends.

"It's been a long season just watching the games," continued Harrold.

"I've had a couple of chats with the manager about it and he hasn't really told me yes or no, but I feel really strong after playing in a practice match this week."

Defender Michael Smith also signed a new two-year deal this week, and the Northern Irish right-back spoke enthusiastically about his time in the West Country.

"I wasn't playing professional football here before I signed and it's been the best two years of my life, which is why I've signed.

"Ever since the new gaffer has come in we've been solid at the back and we've done fantastically well.

"I wanted to stay here. I spoke to the gaffer and he sorted it out for me."