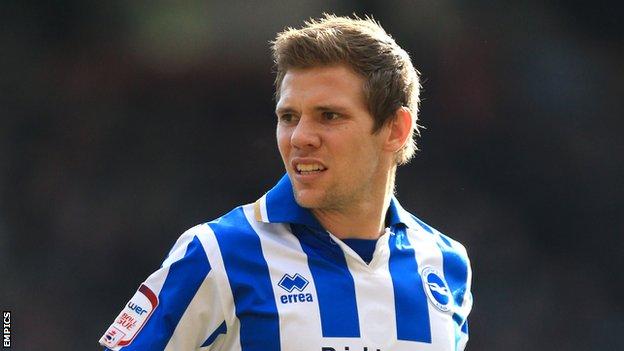 Brighton midfielder Dean Hammond is eyeing his second successive promotion to the Premier League after achieving the feat with Southampton last season.

Albion are currently fourth in the Championship table.

He told BBC Sussex: "There is a long way to go yet. Last year was fantastic. Going through that was unbelievable and is something I will always cherish.

"Doing it again would be amazing. We have put a lot of hard work in this season and are in a great position."

The 30-year-old is currently on a season-long loan with the Seagulls after joining from Southampton on transfer deadline day in August.

Brighton are currently three points ahead of seventh place and, after winning back-to-back automatic promotions with the Saints, Hammond is targeting a successful play-off campaign.

My target was to do the best I can being back at Brighton. What happens in the future I honestly don't know

"As a player you say the best way to go up is through the play-offs because of the excitement of it," Hammond continued.

"I have never been in the play-offs myself and I'd love to do it.

"It would be a massive achievement for the club.

"The last two games have been a lot of effort but taking four points from two away games sets us up nicely for the home games [against Blackpool]."

Hammond has made almost 150 appearances for Southampton following his move to St Mary's in 2009 but does not feel aggrieved at missing out on their Premier League campaign.

"It is always nice to achieve things in your career," he said.

"I don't think I've got a point to prove to anyone.

"I have got no bad words to say about Southampton. I loved my time there and it is a fantastic club.

"The only point I ever have to prove is to myself. I am my own biggest critic."

Hammond is still under contract with the top flight club and the former Brighton trainee admits that he is not totally sure where his future lies come the summer.

"I have no idea," he said. "I am just enjoying playing this season. My target was to do the best I can being back at Brighton.

"What happens in the future I honestly don't know.

"I'll finish the season, speak to them and see where my future takes me."