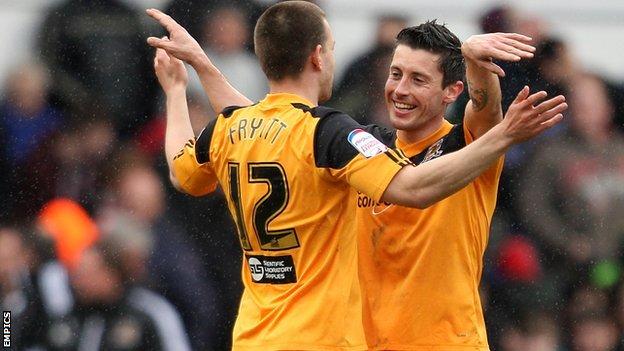 Hull City striker Matty Fryatt has admitted he feared supporters would forget him during of his long absence this season because of injury.

The 27-year-old, who scored 16 goals last term, made his return from Achilles surgery in last Saturday's win at Ipswich after eight months out.

He told BBC Look North: "Things have changed so much from how they were last year and you just feel a bit forgotten.

"The ovation that the fans gave me was really touching."

Despite Fryatt's unavailability, Hull have been in the promotion picture for most of the season.

And he continued: "I wouldn't change for me to have had a brilliant season and us being mid-table for me missing the whole season and the team challenging for promotion."

The former Walsall and Leicester man is confident that the second-placed Tigers can join Cardiff in the Premier League, three seasons after they were relegated from the top-flight.

Steve Bruce's side are six points clear of Watford with three games to play and face already-relegated Bristol City on Friday.

"The team's been superb throughout the season and coped brilliantly," Fryatt added.

"We're nearly there now and I think if we beat Bristol City then that would near enough see us over the line.

"If I could get a goal before the end of the season that would just be the icing on the cake."