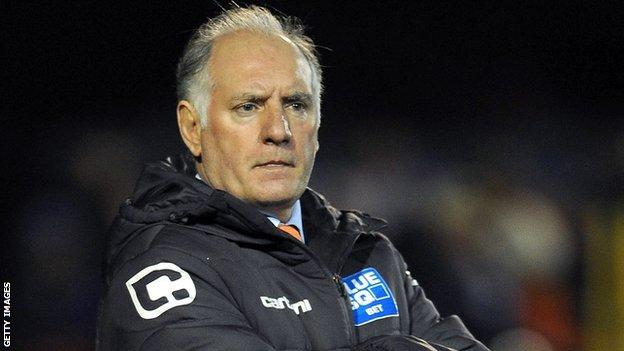 Alan Devonshire will remain Braintree Town boss next season after agreeing to extend his contract for another year.

Devonshire, who has an annual rolling deal, is set to lead the Iron to their best league finish after a campaign in which they also reached the FA Cup first round for only the second time.

"Hopefully we'll sort out the paperwork for that on Thursday afternoon."

The Iron are also in ninth place, three places higher than last term, with one game left to play, despite being bottom of the table last November.

"Alan has done remarkably well, he's put in an enormous amount of time and effort this year," said Harding.

"I think it's a credit to him as much his staff that we're finishing as high and as strongly as we are.

"We set our stall out not to be affected by second-season syndrome and it wasn't going too well in November when we were bottom of the table, but fair play to Alan and the lads, they've pulled it around."

The Cressing Road side have remained part-time throughout their two seasons in the top tier of non-league and Harding does not envisage a switch to full-time.

"We could look at going full-time but that would almost certainly put us in a position where we'll end up spending money we haven't got," he added.

"You get different problems then with insolvency and various other issues. We do it our own way by keeping our head above water financially."