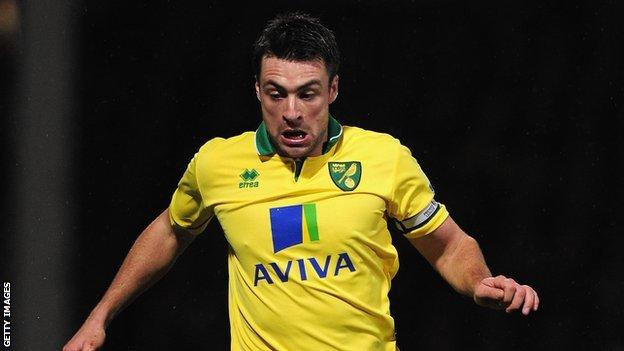 Norwich City defender Russell Martin is convinced his side will avoid the nerves of a final-day relegation scrap.

The Canaries have fives games left and will hope to escape needing a result against Manchester City on the last day of the season to survive.

"But with the quality we've got and the games we've got we should have it done by then."

The Premier League's bottom side Reading travel to Carrow Road on Saturday, with Norwich five points clear of the drop zone.

Chris Hughton's side's run-in also includes home games against Aston Villa and West Brom, as well as a trip to Stoke before the season finale at the Etihad.

And while the Canaries are in a relatively strong position in 14th, they have won just one of their last 16 league games.

"What's the point in being nervous? We're playing in the best league in the world," said 27-year-old Martin.

"I'm still enjoying it. Maybe other people look at it and think it's getting tight, but it just adds a bit of excitement for the fans.

"There's no doubt in my mind and if we win on Saturday it will go a long way to achieving that."