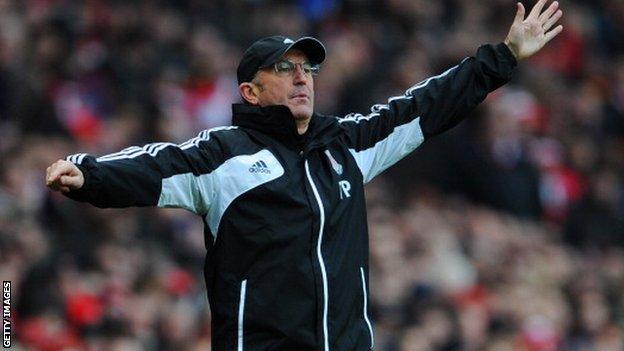 Stoke manager Tony Pulis has issued a "call to arms to everybody in Stoke" in a bid to help the team retain their Premier League status.

One victory in the last 14 games has seen the Potters slide down the league, leaving them three points above the relegation zone with five games left.

"We have got five games, five throws of the dice to get the six points we need," said the Welshman.

"We need everybody around. It is a call to arms for everybody in Stoke."

Stoke have picked up only one point of the last 21 available, putting a continuation of their five-year stay in the top flight in jeopardy.

Pulis's men face four of their fellow strugglers - Queens Park Rangers, Norwich, Sunderland and Southampton - in their final five matches and the manager has told his players to stay "focused and positive".

Some fans have begun to make their displeasure known by booing during matches, but Pulis insisted they were in the minority.

"This is when we need everybody to stick together and I think the majority of supporters understand we need their help," he said.

"There might be a small portion of supporters that have [been booing] but it is not the majority.

"The majority of supporters have been brilliant. They understand we are in a battle and they are right behind the team."