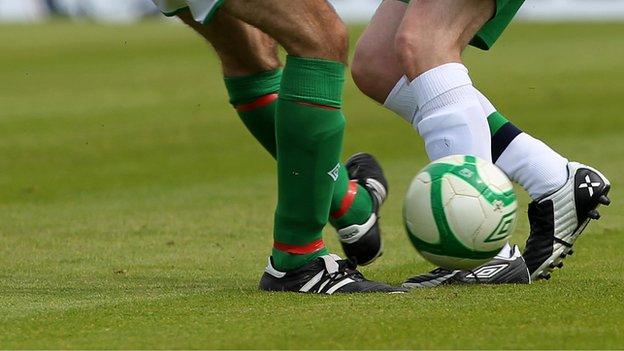 Three Limavady United players have been given lengthy bans after being found guilty of involvement in betting on one of their Championship One matches.

Trevor Parkhill, Richard Close and Laurence McCormick were the subject of an IFA probe after a bookmakers firm reported irregular betting activity.

The charges related to a match against Dergview which Limavady lost 2-0.

Limavady vice-chairman David Brewster said the club had informed players about the IFA's rules on betting.

"A club representative had to attend the disciplinary hearing with the three players," said Brewster.

"The club was exonerated."

Limavady had already suspended the players, pending the investigation by the Irish Football Association.

IFA rules state players are not allowed to place a bet on a game involving their own club.

Close and McCormick were found to have brought the game into disrepute and to have improperly sought to influence the outcome of a game.

Defender Close was banned until 1 January 2014 and goalkeeper McCormick until the start of the following month.

Striker Parkhill has been suspended until the beginning of October 2013 for bringing the game into disrepute.

Close has already left the Limavady club while the amateur contracts of McCormick and Parkhill end in May.

The betting controversy erupted after a series of bets were placed on the Limavady v Dergview fixture played on 16 March.

Bookmaker Paddy Power submitted records to the IFA as part of the investigation into the alleged breaches of the betting rules.

Limavady are currently ninth in Championship One, the second tier of Irish League football.