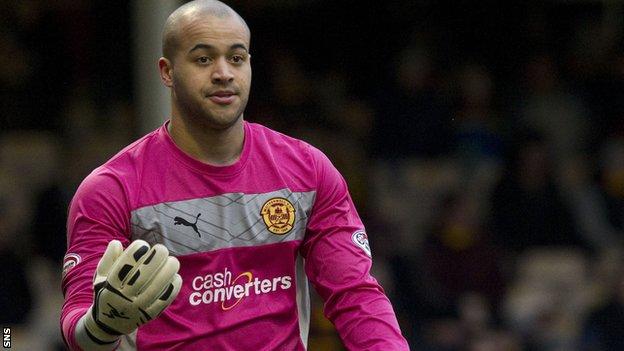 Manager Stuart McCall thinks there is only a "slim possibility" that goalkeeper Darren Randolph will stay on at Motherwell.

The 25-year-old has been a key player at Fir Park since his arrival on a free transfer in 2010.

However, his deal expires at the end of the season and McCall is bracing himself for the Irishman's departure.

"I have been surprised that we have not had offers for him over the 18 months," said McCall.

"I would be absolutely delighted if we managed to keep Darren but I think it is a slim possibility.

"Darren has been outstanding for us and if I was managing in the Championship now I would go for him straight away - and that's not me trying to off-load him.

"He is not only an outstanding goalkeeper, he is a really good guy, he is composed, he gets about his job, never lets us down - you would think I am his agent but I am not.

"I would be extremely surprised if he didn't have very good options."

Randolph, who was on standby for Euro 2012 but did not make the Republic of Ireland's final squad, was coy on his future.

"We have another five games left and I am the same as the other players out of contract," said the former Charlton keeper.

"Wherever it, is I want to play. That's why everyone is in football, to play.

"So wherever I can do that I will be there.

"If we could keep the core of the team then I suppose it will make it easier to decide."

McCall, who agreed a two-year contract extension in March, may have a major rebuilding job over the summer, with top-scorer Michael Higdon, Tom Hateley, Nicky Law, Chris Humphrey, Omar Daley, Simon Ramsden, Steven Saunders and James McFadden also out of contract at the season's end.