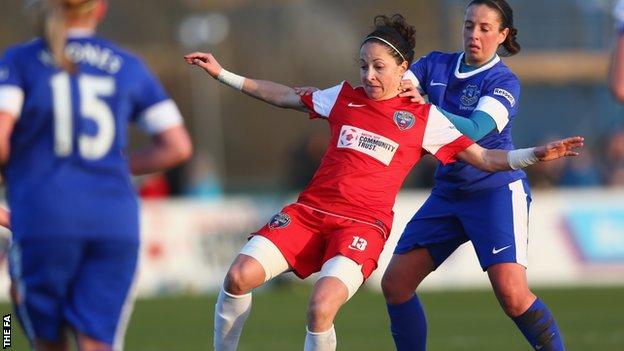 A late goal by Corinne Yorston gave Bristol Academy a 4-3 win over Everton in the Women's Super League.

Ann-Marie Heatherson fired Bristol ahead before Toni Duggan headed Everton level and then tucked away a penalty.

Bristol's Spanish striker Natalia levelled it again with a lobbed effort and Yorston drove home her first of the game before Alex Greenwood's free-kick looked set to earn Everton a point.

Academy were not to be denied, however, as Yorston struck the winner.

Everton were looking to avenge their 3-2 FA Cup quarter-final defeat by the same opponents on Sunday.

Academy again had home advantage in what was the first WSL outing of the new season for both sides.

The early stages brought no clear-cut chances until Bristol's Natalia forced goalkeeper Rachel Brown into a good save.

Striker Heatherson shot the home side ahead in the 28th minute, but Duggan headed Everton back on to level terms four minutes later.

And just two minutes later, the winger struck her second goal from the penalty spot after midfielder Kelly Jones had been brought down.

The goals kept coming in an end-to-end second half with both sides going all out for the three points.

Academy then took the lead again through Yorston's superb 25-yard drive on 78 minutes.

But it was back to level-pegging when Everton defender Greenwood scored direct from a free-kick.

Yorston's second goal of the night, nine minutes from time, proved to be the winner.