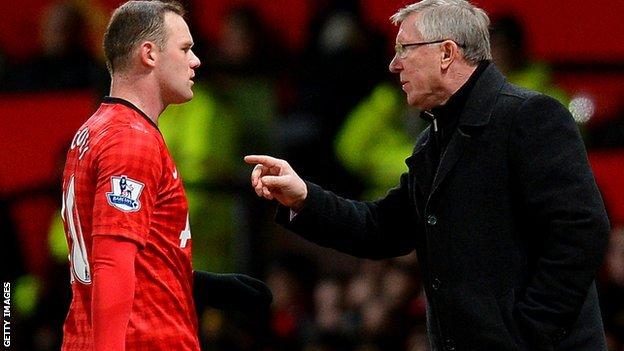 Rooney, 27, was substituted in United's 2-2 draw against West Ham on Wednesday and is rumoured to be a transfer target for the French Ligue 1 leaders.

"I don't think there is anything in that at all," said Ferguson.

"As far as taking him off the other night, it was simple - he wasn't playing as well as Shinji [Kagawa]."

Wayne Rooney has scored 16 goals in all competitions for Manchester United this season and has started 29 games, making a further five appearances as a substitute.

The Scot added: "In so many games Wayne Rooney is better than most players, but on the night Shinji was playing so well."

Rooney joined Manchester United for £20m in 2004 but has found himself playing in a deeper midfield role at times this season.

He was also left out of the starting team for United's vital Champions League last-16 second leg tie against Real Madrid, which the English side lost as they were eliminated from the competition.

Ferguson, who last month "gave his word" Rooney would be staying at Old Trafford, refused to be drawn on whether he was trying to negotiate a new contract with the forward, saying: "I couldn't tell you about that."

Meanwhile, the United boss has admitted he made a mistake in his second substitution at Upton Park, when he replaced Kagawa with Javier Hernandez with 11 minutes left.

"We were chasing a goal and I decided to put Chicharito on but Shinji then made the second goal," said Ferguson.

"I'd already given the fourth official the card and Chicha was standing on the touchline but then we scored the second goal. If I'd changed my decision then we would have won it."

Manchester United are 13 points clear at the top of the table and only need a further six points to win the Premier League title for the 13th time.