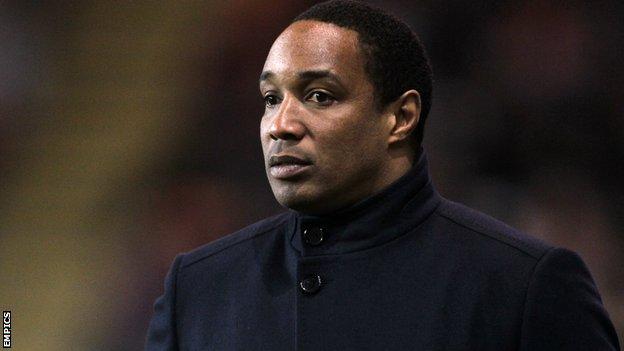 Blackpool boss Paul Ince will make some changes to his team over the summer but says he is "very happy" with the core of the side.

It is understood 36 players are due to be out of contract at the end of the season but many of those, such as Tom Ince, have extension clauses.

Alex Baptiste, Kirk Broadfoot, Gary Taylor-Fletcher are among a number of players who will require new contracts.

"It's definitely rebuilding but it's not a major rebuilding," Ince said.

"When I look at the core of the team I'm very, very happy. As far as I'm concerned sitting here now I'd be more than happy if the majority of them wanted to stay," he continued to BBC Radio Lancashire.

"When I look at the squad they all get on well, they are all happy and enjoy being together which is the most important thing - that they enjoy what we're trying to do."

Ince's son Tom has been heavily linked with a move away from Bloomfield Road, but earlier this month the Tangerines boss said that it could take up to £25m for him to move.

Elsewhere, Blackpool also have options on players such as Matt Phillips, Craig Cathcart and Barry Ferguson for next season.

With three games to go in the Championship this season, Ince's side sit four points above the relegation places, and chairman Karl Oyston has cut season ticket prices to thank fans for a "disappointing season".

"I am ambitious and I want to change the whole ethos of the club and we're trying to do that step by step," Ince added.

"I think if the players see that then hopefully they want to be a part of it and if they don't then I can't stop them from leaving without a contract.

"What I can do is bring people in who would believe in the vision of this club and want to go forward next year.

"I've had a couple of discussions with the chairman, but there's agents involved and all that stuff so there is a lot of things to sit down and talk about."