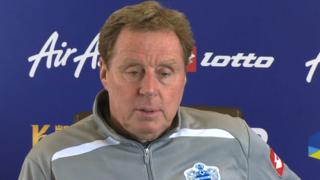 Harry Redknapp believes his "dream" of keeping QPR in the Premier League is "still alive", despite the fact that his club are 10 points adrift with only five games to go.

The club lie second-bottom in the table ahead of their must-win game against Stoke on Saturday.

Redknapp says the owners of QPR "don't deserve" relegation, but feels the players and supporters need to "keep believing".