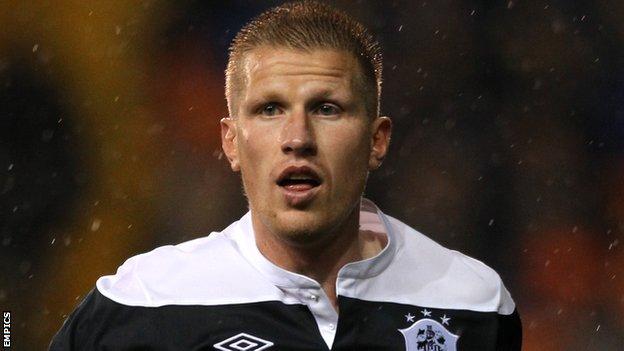 Huddersfield midfielder Keith Southern has called upon his teammates to hold their nerve going into the final three Championship games of the season.

The Terriers currently find themselves in the drop zone on goal difference.

Southern, who recently returned from injury, says they need to be confident as the season draws to an end.

"It's who holds their nerve and has the quality in the final third to get over the line [who will stay up]," the 31-year-old told BBC Radio Leeds.

"I'm hopeful the squad's good enough, and we can have the tunnel vision and total belief we can get out of it."

The second tier of English football this season has been one of the most tightly contested since it became the Championship in 2004.

Had Huddersfield ended last season with their current total of 51 points, they would have finished in relative safety in 17th place, 11 points clear of the drop zone.

The highest points total needed for survival since the Championship's formation has been 52 points, and Southern feels that the competitive nature of the league will more than likely mean this tally will not be enough to ensure survival.

"Nobody said it was going to be easy this season," he added. "There's a fine line in this league this season between staying up and getting promoted - a lot of the games are on a knife edge for long spells.

"If you look too much at other team's results, you'll go around the bend. I've been in the game long enough to know you can only effect what you do.

"We've had no favours from other sides because they've all been on promotion form, hence why it will probably be the highest points tally ever."