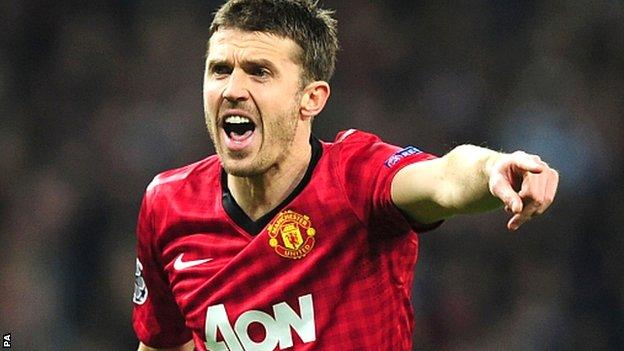 Manchester United's Michael Carrick is on a shortlist of six for the Professional Footballers' Association Player of the Year award.

Bale and Hazard are also up for the Young Player of the Year award, along with Christian Benteke, Romelu Lukaku, Danny Welbeck and Jack Wilshere.

Suarez has attempted 279 runs and dribbles

Van Persie has scored a goal every 127 minutes

Hazard has a 60% shooting accuracy

This year marks the 40th anniversary of the award, first won by Norman Hunter of Leeds United. The winner will be announced on 28 April.

Players are not allowed for vote for anyone at their own club.

Carrick, 31, who joined United from Tottenham in 2006, has been a key figure for the Premier League leaders this season, making 41 appearances.

PFA chief executive Gordon Taylor said: "He is a players' player. He doesn't make big headlines but he is highly regarded by his fellow professionals."

Bale, 23, has scored 22 goals in 38 appearances for Tottenham this term, helping the club reach the Europa League quarter-finals and push for Champions League qualification.

"He just lights up the pitch," said Taylor of the Welshman. "I am not surprised some of the world's leading clubs may be knocking on the door, but I hope he stays here."

After scoring 37 times in his final season with Arsenal, Van Persie joined United for £24m in August and has scored 25 goals in 43 appearances for them thus far.

As for Suarez, who has scored 29 goals in 46 appearances for Liverpool this season, Taylor insisted the Uruguayan should be judged simply by his achievements on the field.

Player of the Year winners

The 26-year-old Uruguay international was banned for eight games by the Football Association in 2011 after being found guilty of racially abusing Manchester United's Patrice Evra and has also attracted criticism for diving and stamping.

"It would be naive to think controversy won't continue to travel with him, but this is a footballing award," Taylor said.

"Sometimes the intensity that causes a problem also makes sure they win. His football ability shines through."

Chelsea duo Hazard, 22, and Mata, 24, have also impressed, helping the Blues to the Europa League semi-finals.

"Mata has been a lynchpin in that Chelsea side," Taylor observed.

The young player category is awarded to those players aged 23 or under at the start of the season.

Former Manchester United forward Cristiano Ronaldo was the last player to win both awards in the same season, in 2006-7, when he also claimed the Football Writers' Association prize.

Aston Villa's Belgian striker Benteke, 22, has scored 19 goals in 35 games in his first season at Villa Park, while Chelsea's Lukaku, 19, has struck 13 times in 32 appearances on loan at West Brom.

United striker Welbeck, 22, has become a regular in the England squad, while Arsenal midfielder Wilshere, 21, has made a successful return after missing the entire 2011-12 season and Euro 2012 with ankle trouble.