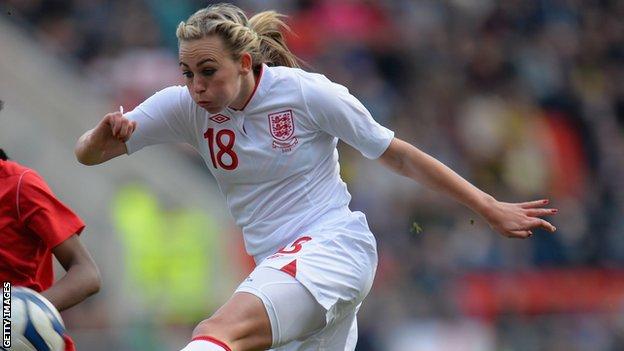 The shortlist for the Professional Footballers' Association's inaugural Women's Player of the Year awards has been announced.

Nominees include Gemma Davison, Kim Little and Jordan Nobbs from the Arsenal team which have reached the semi-finals of the Champions League.

The winner will be named on 28 April.

PFA chief executive Gordon Taylor said it was fitting that the 40th anniversary of his union's awards ceremony should recognise the rapid development of the women's game.

"We can't ignore what has been a real success story, internationally and domestically," he said.

"We have the Women's Super League, we have seen the England women's team do well and qualify for tournaments. We saw Team GB against Brazil at the Olympics, which filled Wembley.

"More and more young girls are taking part and that is something we should be proud of.

"Everybody knows Arsenal have been successful but I hope other teams will give the same prominence to their women's team to be able to challenge them effectively.

"The women's game needs some commercial backing but seeing as women make up 50% of the population, it is something we should be mindful of."

Forward Duggan, 21, and 20-year-old midfielder Nobbs are current England internationals with six and four caps respectively, while striker Davison, 26, picked up her only England cap in 2009.

Wales captain Fishlock, 26, has 67 caps for her country while fellow midfielder, 22-year-old Little, has made 81 appearances for Scotland.

Jodie Taylor, 26, is on loan from Birmingham to Swedish side Gothenburg.