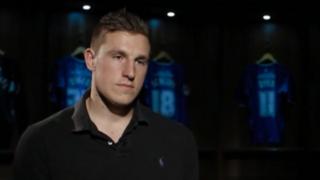 The 21-year-old scored the opening goal in Leicester's vital 3-2 win over Championship promotion rivals Bolton on Tuesday, which lifted the Foxes back into the top six.

Wood, who flew halfway around the world to join West Bromwich Albion as a 16-year-old, moved to the King Power Stadium in January for a fee believed to be in the region of £1m.

During his time at the Hawthorns, Wood was sent out on loan to Barnsley, Brighton, Birmingham, Bristol City and Millwall.

Wood features on BBC Late Kick Off Midlands at 23:25 BST on Sunday on BBC1. The show will be available on the BBC iPlayer from Monday.