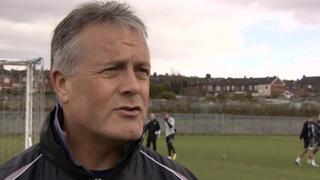 Port Vale manager Micky Adams is urging his team to complete their quest for promotion at a packed Vale Park against Northampton in League Two.

Twelve months ago Vale were in administration, but Adams has still maintained a League Two promotion assault this season and is now urging his squad to secure promotion on Saturday against Northampton.

"This will be a fantastic occasion if we get it right," Adams said.

Vale were bought out of administration in November by new chairman Paul Wildes, and a six-match unbeaten run has left them tantalisingly close to promotion for the first time since May 1994.

Port Vale's game against Northampton will be featured on BBC Late Kick Off Midlands at 23:25 BST on Sunday on BBC1. The show will be available on the BBC iPlayer from Monday.