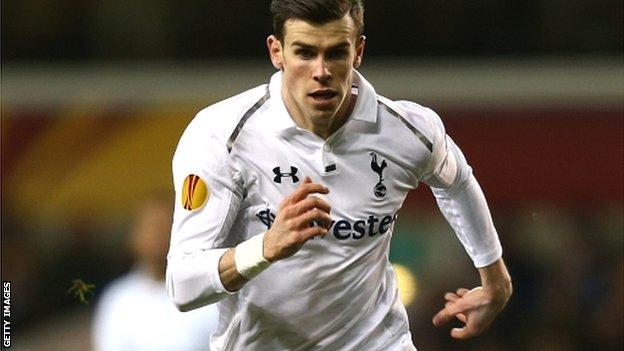 Bale, who has scored 22 goals for Spurs this season, was injured in the first-leg of their Europa League quarter-final against FC Basel on 4 April.

He has missed only one league match, the 2-2 draw against Everton.

"He's made good progress to train with the team so I think he'll definitely up for selection," Villas-Boas said.

Bale had been in outstanding form before his injury, scoring 10 goals in eight games between 30 January and 7 March.

Spurs finished fourth in last season's Premier League but were denied a place in the Champions League after Chelsea, who came sixth, beat Bayern Munich on penalties to win the competition.

A 12-match unbeaten run took Spurs to third place but they currently lie fifth, two points behind fourth-placed Arsenal but with a game in hand.

Influential winger Aaron Lennon, who was also injured against FC Basel at White Hart Lane and missed the Everton match plus the return leg in Switzerland, is also expected to be in contention for a place in the squad against City.

And striker Jermain Defoe, who has missed the last three Tottenham games with a pelvic complaint, has trained with the team all week.

Asked about his team's chances of securing a place in the top four, Villas-Boas said: "Arsenal have probably the easiest run-in, although they play Manchester United at home.

"We lost some points recently which have put us back into a position we were in before but still everything depends on us because of this game in hand we have against Chelsea.

"But I think it is a great, great spectacle for the Premier League and hopefully we can be there in the fight."