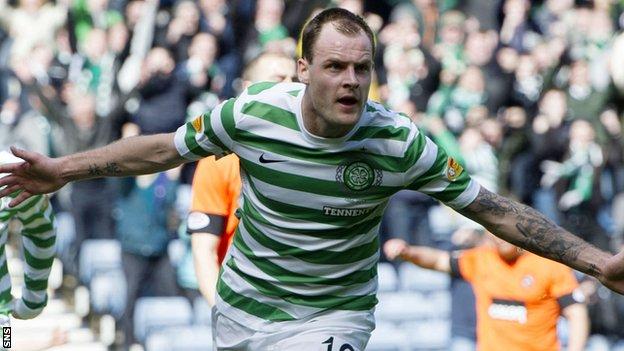 Celtic are to offer Anthony Stokes a new contract, with the Irish striker nearing the end of his current terms.

Manager Neil Lennon revealed the news but did not go into any details on the length of the proposed deal.

Stokes, who joined the club from Scottish Premier League rivals Hibernian in August 2010, missed five months of the season through injury.

The 24-year-old headed in the winning goal in Sunday's Scottish Cup semi-final against Dundee United.

He came off the bench at Hampden to settle a 4-3 thriller in extra time.

It was a fifth goal of the season for the Republic of Ireland international, who found the net on 40 occasions during the previous two campaigns with Celtic.

Capped four times, Stokes has not been selected for his country since he withdrew from the 2011 Nations Cup, citing tiredness.