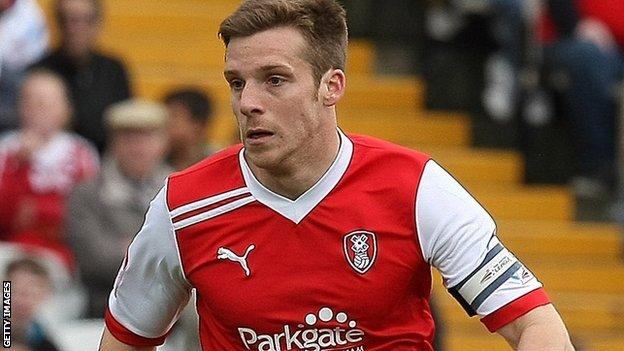 Rotherham United beat Aldershot Town to secure promotion to League One, while the Shots were relegated to the Football Conference.

Johnny Mullins scored from close range to put the Millers in front before Lee Frecklington fired in from the edge of the box late on.

Victory means the Millers finish above Port Vale as runners up in League Two.

The Shots, who finish bottom of the table, leave the Football League after a five-year spell.

But the Millers got the breakthrough they needed in the second half when Michael O'Connor's free-kick was fumbled by Jamie Young and Johnny Mullins stabbed home.

Frecklington then broke away to fire home in injury time and take Steve Evans's side up to the third tier.

"I walked out on (Crawley) 12 months ago to come to a club that I believe could be a Championship club.

"We've got a lot of hard work to do to just be a League One club, but we'll get there very quickly under a fantastic chairman and supporters that have been incredible all season.

"And we've finished runners up to a very good Gillingham team."

"You've got to have the mentality to win, and work hard and you've got to have a desire and pride in your own performance and not enough players in that dressing room over the season have done enough.

"Some will walk away thinking they've done enough but they haven't and so the mentality in the side, the structure and the way we recruit players has got to be better.

"There are players that have done well but the other people around them have got to do well and there's too many players who think they know it all."