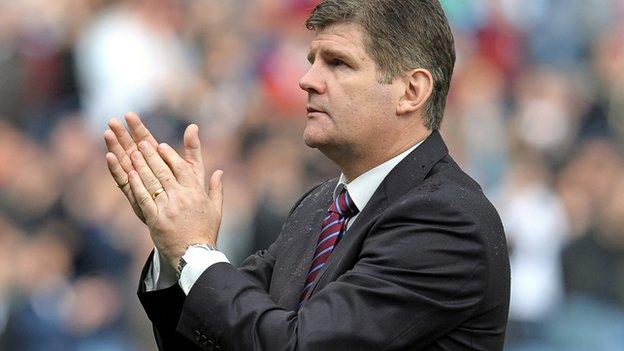 Scunthorpe United were relegated from League One despite beating Swindon.

James Collins tapped in his 18th goal of the season to give the visitors the lead before Michael Collins slotted home from eight yards to level.

Mark Duffy's penalty gave the Iron the lead after James Alabi was fouled by Aden Flint and Karl Hawley fired in from close range late on.

But Scunthorpe dropped into League Two as Colchester won at Carlisle to finish three points ahead of Brian Laws' side.

Scunthorpe, who had been in League One for two years, have now been relegated twice in three seasons after dropping out of the Championship in 2011.

Swindon will face Brentford in the play-offs after late drama saw the Bees miss out on automatic promotion at the expense of Doncaster.

"It's a horrible taste, it's one that people will have probably have thought about in the last couple of weeks in particular because it's not nice going back to that basement of where we once where.

"Now that we know our destiny, we've got to re-group and move forward and that's certainly something the club as a whole needs to do along with the supporters.

"The squad as a whole has not been good enough to survive and it's always been a chase to try and get out of the negativity and get into the middle of the table."

"Very disappointed. I felt that for 90 out of the 96 minutes we were the better side and probably in control.

"We just had a mad five minutes. We had enough experience on the pitch to run the clock down. We did well enough up to then.

"In the end it's a defeat and a poor defeat because our play warranted a better result than that."