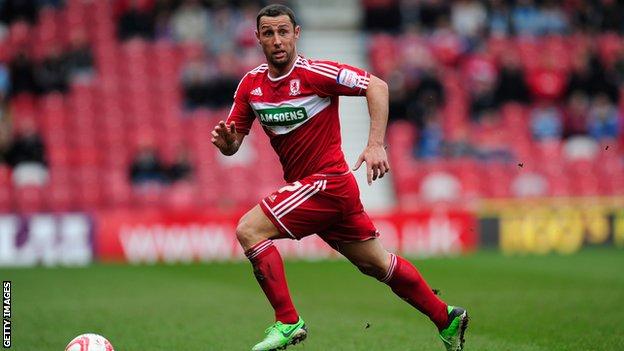 Bradley Pritchard put the visitors ahead after only 32 seconds, and a Rhys Williams own goal doubled their lead.

But Marvin Emnes scored from close range to give Boro hope before McDonald headed home from a corner.

Chris Powell's Charlton started the day five points off the play-offs, and fall short with one game remaining.

In the first minute, Ricardo Fuller's long run down the left allowed him to set up Pritchard to shoot into the roof of the net from 12 yards.

Boro conceded again in the 17th minute when defender Williams deflected Charlton forward Yann Kermorgant's low cross from the right past his own goalkeeper, Jason Steele.

But Emnes gave Boro a chance with 14 minutes remaining, converting Grant Leadbitter's cross from the right.

Substitute McDonald impressed after coming on nine minutes into the second half, and capped off a fine day when he headed in Mustapha Carayol's corner on 87 minutes to grab a point for the hosts.

There was still time for Carayol and then Charlton's Danny Hollands to try to win the game for their respective sides, but both efforts failed to find the net.

"I can understand the fans' frustrations. We built up their expectations in the first half of the season and have let them down in the second.

"And I was angry today. Maybe there wasn't a lot riding on the game for us but I told them it was the last home match and I expected a display.

"With respect, in my opinion we should be beating teams like Charlton here at our place. And the fans think so too."

"It is exasperating. For me the officials have got some big decisions wrong today and that is disappointing and frustrating.

"There was what looked like a clear-cut penalty in the first half and another in the second - and if you ask Tony he will tell you that Middlesbrough might have had one as well. That said, I was pleased with the perfromance if not the result.

"I'm pleased with the way the team have performed after coming up a league. It is a credit to the group and bodes well for next season."