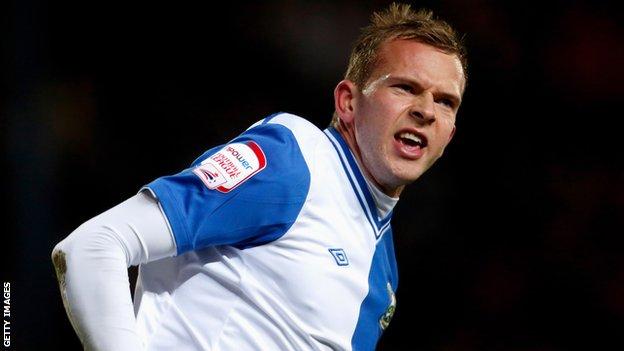 Blackburn Rovers all but secured their Championship status after Jordan Rhodes's equaliser put a dent in Crystal Palace's promotion ambitions.

But their battle for a play-off place will go down to the final week after Rhodes beat goalkeeper Julian Speroni from an acute angle to level it up.

Palace will secure a top-six spot if they win one of their last two games.

Since beating Hull 4-2 at Selhurst Park on 5 March, Palace have lost four games and drawn a further four. They have not been outside the top six since September.

The worry for Palace manager Ian Holloway is that his side have now gone eight games without a win.

They travel to struggling Millwall on Tuesday before finishing the regular season at home to Peterborough next Saturday.

Palace took the lead in the 28th minute when former Swansea forward Dobbie collected Wilbraham's flick-on and got the better of Grant Hanley to produce a smart finish.

Rovers responded three minutes before the interval through the in-form Rhodes, the Scotland international striker scoring his fifth goal in six league games after bursting clear to lift the ball over Speroni.

Palace pushed forward in search of the winner after the interval, with both Glenn Murray and Mile Jedinak hitting the crossbar.

But Blackburn, who travel to Birmingham on the final day, could have secured all three points had it not been for David Goodwillie firing over from a good position.

"We've hit the bar twice and do I need to mention the most blatant shove on anybody I've ever seen.

"The rest of the game was good and Blackburn played their part but I thought we were solid, looked in control of things. It [getting into the play-offs] is still in our hands but I thought it should have been over today. It was a very thorough away performance.

"Generally, I'm pretty bemused how we haven't got three points."

"It's a good point against very good side. They're an attacking team and play a passing game but I thought we matched it at times and played some good stuff ourselves. With a little bit more care in the attacking third, we might just have won it.

"But we've shown against a good team how close this championship is. We're delighted with a point but maybe we could have got three."