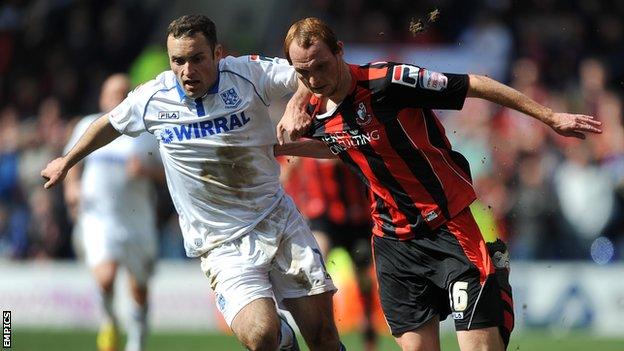 Bournemouth missed out on the League One title after a goalless draw at Tranmere and Doncaster's dramatic last-minute victory at Brentford.

The Cherries had the better chances with keeper Jason Mooney pulling off a decent double save early on.

Marc Pugh also went close with a neat turn and shot but it ended goalless.

The Cherries headed into the game knowing a win would definitely secure the title while a draw would also be enough for Eddie Howe's side if results elsewhere went their way.

Hoping to secure a club-record ninth successive victory the Cherries made a bright start with debutant Mooney making a smart double save to deny both Arter when he fired goalwards from the edge of the box and then Shaun MacDonald on the follow-up.

In a half of few chances, Arter sent a shot wide under pressure after a fine run while he went close immediately after the break with a volley that flew just wide with Mooney beaten.

Pitman sent a free header from eight yards straight at the keeper while Pugh's turn and strike flew just wide as Cherries pressed hard for an opener.

Josh McQuoid side-footed wide late on for Bournemouth, who thought their result would be enough, but James Coppinger's injury-time goal for Doncaster meant Rovers secured the title.

"It's football. The ups and downs are unbelievable., we haven't won the title and we were desperate for that.

"It was the cruellest way it could ever be snatched away but what can you do? It's out of our control. We did everything but win the game, our performance was excellent...we just didn't get that break we needed.

"I have to look at the overall picture and how far this club's come from a few months ago. If someone had said you'd be disappointed if you don't win the title on the last day we wouldn't have believed it."