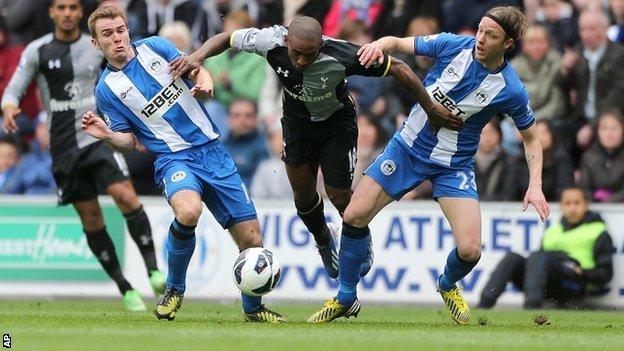 A last-minute own goal by Emmerson Boyce denied Wigan what would have been a crucial victory over Spurs and left their survival hopes in the balance.

Wigan had been within a minute of a first league win since March when Boyce deflected beyond his own goalkeeper.

Spurs had taken an early lead through Gareth Bale, only for Boyce to head Wigan level within two minutes.

Callum McManaman's stunning strike had put Wigan on course for victory before Boyce's late own goal.

This was a result that did little for either side. Wigan remain in the relegation zone two points behind Aston Villa, who play Sunderland on Monday, while Tottenham missed the chance to move above Chelsea and remain in fifth place.

In their 300th Premier League fixture, Wigan did much to dismiss the growing sense that this season may be one relegation battle too far with a performance that owed more to perspiration than inspiration, but in the end Roberto Martinez saw a vital two points slip away to leave his side facing a desperate battle with four matches left.

Martinez believes three victories in the final four matches - against West Brom, Swansea, Arsenal and Aston Villa - may be needed to ensure Wigan will not repeat Middlesbrough's feat in 1996-97 of reaching an FA Cup Final and going down in the same season. It remains to be seen how costly the two points dropped today will be.

Wigan had never beaten Spurs twice in a season and after nine minutes it appeared that would again be the case as they made the worst possible start. Maynor Figueroa, making his 200th appearance for Wigan, hesitated as he exchanged passes with goalkeeper Joel Robles.

Bale immediately spotted his opportunity and closed down the Wigan goalkeeper, whose lacklustre clearance deflected into the net off the Welshman's outstretched right leg.

But within two minutes Wigan had struck back as defender Boyce rose above Jan Vertonghen to thump a header beyond Spurs goalkeeper Hugo Lloris from Shaun Maloney's corner.

It was the response the Latics had needed. Wigan battled, tackled and denied their more celebrated rivals space as Spurs struggled to find their rhythm. Kyle Walker was a constant source of danger down the Spurs right, as was Bale, but Wigan's work-rate was admirable, their players doubling up on Spurs' main threats.

Jermain Defoe did, however, find space. The England striker went close after a mazy run, only to be denied by some last-ditch Wigan defending while Bale headed narrowly over the crossbar from Kyle Naughton's pin-point cross. Tom Huddlestone had earlier struck the outside of the post with a clever free-kick from a narrow angle.

But Wigan recovered their poise to produce some typically eloquent attacking moves at the start of the second half. It was from one such break that they snatched the lead, as McManaman cut in from the right before unleashing an unerring left-foot strike that fizzed beyond Lloris and into the roof of the net.

The goal rocked Spurs. Bale was struggling to escape the attentions of Wigan's dogged defenders, as was Clint Dempsey and Defoe.

Wigan, on the other hand, kept creating chances. Arouna Kone might have done better when well-placed twice in the dying minutes, while Jordi Gomez was fortunate to escape punishment after his boot connected with Lewis Holtby's head. But Spurs kept coming, winning a controversial free kick as Walker and Jean Beausejour tangled on the right of the penalty area.

Huddlestone's low cross caused panic in the Wigan defence, Bale swung a boot but the ball flicked off Boyce's shin and into the net. Defoe, Bale and Clint Dempsey all went close in the dying minutes but in the end neither side went away happy.

"It is another point. First and foremost we were playing against an outstanding side, who are fighting to get into a Champions League place. When you think of that you must see it as a point gained, I thought we were magnificent throughout. The equaliser is what disappoints me.

It is not a free-kick in the first place, when you are [towards the bottom of] the table it seems you attract the ball to be in the back of the net sometimes but those are the small margins that sometimes affect the results. But I couldn't be happier and prouder."

"We did ever so well in the first half, 10 shots against their two. The problem is that when we came back on after half-time we thought we were in control and Wigan scored almost straight away and that really shook our confidence. It seemed to be against the run of play. But it is good to salvage a point, hopefully it can turn out to be an important point."