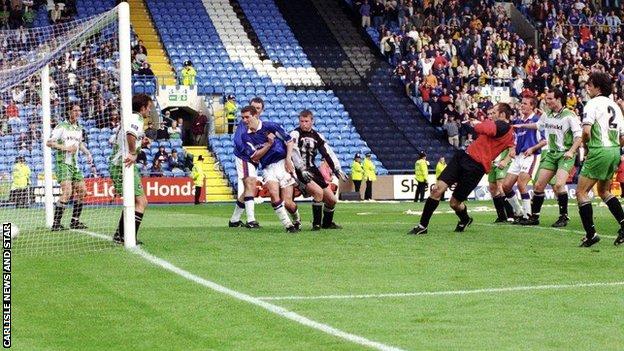 "He is going to do a Jimmy Glass." Listening to the radio in his taxi in Wimborne Minster (Dorset), the man himself could not help but laugh at how a goalkeeper was described making his way up the pitch for a last-minute corner at the 2010 World Cup.

The moment being alluded to was that injury-time goal Glass struck to keep Carlisle United in the Football League on 8 May 1999 as he went from being a journeyman keeper to a household name in a split second.

On Saturday, seven League Two teams will be searching for their own final-day hero as they fight to preserve their Football League status.

Here, Glass, together with some others involved in Carlisle's great escape - lifelong fan Keith Elliott, then-assistant boss John Halpin and then-director Andrew Jenkins - take us through the range of emotions clubs up and down the country will be going through on Saturday.

"It can be the best or the worst day," said Glass, now 39. "Moments like mine happen few and far between, but elation will be felt by some on Saturday night and despair for others."

A midweek win for Scarborough over Plymouth left Carlisle bottom of Division Three with one game to go and their fate out of their own hands. Victory for Scarborough on the final day of the season at home to Peterborough would relegate the Cumbrians out of the Football League, with Carlisle needing to beat Plymouth to even stand a chance of survival.

JIMMY GLASS (JG): "The atmosphere around the club and in and around the town was despondent. You could understand the immense occasion that was about to happen and the pressure that was on everyone.

"Being a goalkeeper, the reality was if Carlisle were relegated it would have been a very different memory of Jimmy Glass for the Carlisle fans."

KEITH ELLIOTT (KE): "It was a traumatic week. There was a funny feeling around work as the weekend got closer. It was all we could talk about but I don't think anyone was looking forward to it."

ANDREW JENKINS (AJ): "We have had a lot of nerve-wracking moments at Brunton Park but that one really stuck out. Thinking you were going out of the League did test your nerves."

JG: "It was a tough morning. The atmosphere in the hotel, approaching the ground, among the stewards, was horrible. Realistically speaking, everyone thought Carlisle were going to be relegated."

KE: "It is when you wake up on the morning of the game that the nerves really hit home. There was a dour feeling and the butterflies were in the stomach. There was a feeling of dread, a feeling that we were going down.

"My wife, Susan, and I met up with some friends before the game for a drink and there was a subdued feeling around the ground and around the bar. Pessimism was probably the word that summed the mood up."

JH: "Manager Nigel Pearson was staying at mine and we were sitting over the breakfast table going over every scenario possible. We just wanted to get to the ground.

"People I've spoken to said the same things. The late Derek Lacey, the BBC Cumbria radio reporter, said he ended up having a cup of tea in his car at a service station at 4am. No-one could sleep a wink."

JG: "The crowd started off hopeful but you could sense the tension."

KE: "There was a big crowd but I wouldn't say we we were expectant. Everyone was ready with their radios and their phones to keep the score coming through from Scarborough. If we didn't win, it didn't matter what Scarborough did and that was the worst bit about it. It wasn't in our hands."

DL: "In the dressing room the mood was quite relaxed. The players knew they had to win the game and then just hope. Obviously there was an edge but we were all quite jovial."

As results stood, Carlisle were going down. The Cumbrians were drawing 0-0 with Plymouth, while Scarborough were drawing 1-1 with Peterborough, having levelled just before the break.

KE: "A roar went up around the place as Peterborough took the lead at Scarborough. The news filtered through quickly enough and there was a sense of hope that started spreading around the ground.

"We knew we had to score though and the mood was suddenly deflated when Scarborough levelled before the break. We still knew, as it stood, a goal would be enough but, fearing the worst, we expected Scarborough to go on and win the game."

JH: "We knew what was going on at the other game but we weren't that interested because unless we won it didn't matter. "

Carlisle's task looked even harder when Lee Phillips gave Plymouth the lead on 49 minutes. David Brightwell levelled on 62 and, with Scarborough still drawing, there was still hope.

JG: "People were shouting from the crowd but you try to focus on what you are doing. It was only towards the end of the second half, when the crowd were getting more excited and the tannoy guy, Colin Carter, was shouting down the tannoy, that we got the gist of what it came down to.

"Their goal was a massive blow. Carlisle were not playing very well and to turn a game round was a big ask. Most people thought it was over. David Brightwell's equaliser injected a bit of life into the game, a bit of hope."

KE: "When Plymouth took the lead the ground fell silent. It was looking very, very bad for us and there was a sense of just waiting for the inevitable. It is a horrible feeling, quite difficult to describe. The mood changed when David Brightwell levelled for us. All we needed was a goal.

"The tension was intense. While we were all desperate for another goal at our game, we were also glued to events at the other game. As the time ticked down, you got the sense a lot around the ground had given up.

JH: "Going behind was like a dagger going into us. The crowd understandably went quiet but we had to try to stay positive on the bench because it was up to us to get the lads going.

"The mood changed when David levelled. It became a different place and the noise was incredible."

The final whistle had already gone at Scarborough, with their 1-1 draw meaning a win would be enough to keep Carlisle up. But, with four minutes of injury time signalled and the Cumbrians drawing 1-1, time was running out.

Step forward Jimmy Glass. The Carlisle goalkeeper, up for a corner, scored with virtually the last kick of the game to win the game and send Scarborough down.

JG: "I was always a frustrated forward. I looked over to Nigel Pearson and he waved me on. That was it, it all came down to that last kick. If I could bottle that feeling I would be a very rich man now.

"It fell straight to me and the rest is history. You don't get that excitement from driving a cab. It is a amazing feeling, those moments in sport. The change from despair to pure elation for people, the fans, coaches, players, ball boys."

KE: "We thought we were down. You hope that goal comes but you don't expect it. My late father, Ernest, had already left the ground and he wasn't the only one. It was so hard to take.

"What followed was pandemonium as Jimmy scored the winner. It was just totally euphoric. I have never experienced anything like it before or after. Everyone was jumping on each other and the final whistle was met with a pitch invasion. We were in disbelief."

JH: "I remember the tannoy announcer screaming 'get behind the lads' as he told the crowd there were four minutes of injury time left. It was bedlam for those four minutes.

"Jimmy Glass was waved up by Nigel for the corner and I was thinking 'what are you doing?' I hadn't realised the ref had told one of our players the corner kick would be the last action.

"When he scored every emotion came out. The whole season exploded in that few seconds. I was running around like a maniac."

AJ: "We did think it was all over. Shortly afterwards, Manchester United scored late to win the European Cup and everyone said how dramatic it was. It was no more dramatic than ours. The whole place lifted and it was just a celebration."

Two teams will be relegated to the Conference, with all of the bottom seven still fearing for their Football League futures ahead of the final day of the season.

Aldershot must beat Rotherham and need Barnet to lose at Northampton, with a six-goal swing in the process, to survive.

Second-bottom AFC Wimbledon must beat Fleetwood as a draw will not be enough because of their vastly inferior goal difference.

Barnet, Dagenham & Redbridge, York, Plymouth and Torquay could all still be relegated.

JG: "Everyone was so quiet in the restaurant. You expect celebrations but in reality the emotional anxiety knocked everyone bandy. We went into the nightclub and the place erupted. I was being pulled, grabbed and kissed. I was in there for half an hour and snuck out the back door and went to bed."

KE: "We had dinner with our friends and the mood was jubilant. It was only when you got home though you realised what you had just seen. If we had gone down that day, the club might have been finished, it was that serious."

JH: "The champagne was flowing after the game. You would have thought we had won the Premier League.

"The whole club went out in town that night. The atmosphere was incredible, everywhere we went people were treating us like heroes. You wouldn't have thought we were five seconds from going out of the League."

AJ: "The feeling was relief. It is your last gasp. It was unbelievable how it happened. Jimmy is always welcome at Carlisle. He comes back now and again and the supporters love him to bits."

JG: "The reality is I could be anywhere and be recognised now. I have been in a theme park in America and someone has tapped me on the shoulder and said 'you are Jimmy Glass'.

"It is quite tough because some go on to fame and fortune and some go on to driving a cab and living a normal life like me. It is quite difficult to understand your place in life from being this guy who will never be forgotten to being the guy worrying about your next bill.

"The goal was an amazing part of my life and is there to be enjoyed, and I will until people get bored of me. Someone on Saturday will be a hero and someone will be a villain. It is an incredible feeling."