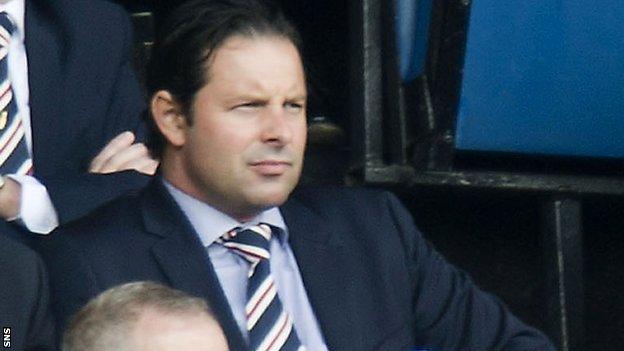 Craig Mather has been appointed as interim chief executive of Rangers and given a place on the board.

Charles Green announced he would be stepping down from the role with immediate effect on Friday.

Mather bought 10% of the club in July 2012 with a remit to assist in youth development, while that initial outlay since diluted to a 3.1% shareholding.

"Craig has invested £1m of his own money in the club and is committed to playing an active part in delivering future success for Rangers.

"He will lead the business on a day to day basis but I want to make it clear we are in a healthy position financially following the successful flotation of the company in December."

A packaging company is one of the 42-year-old's other business interests.

"I could not stand here and tell you I have always been a Rangers fan but I can say, with profound honesty, that I have been around football all my life and I have known of Rangers and their huge successes for many years," Mather told the club website.

"I am well aware of what this club means to so many people. I have been working at Rangers for the last year or so and the commitment and passion from the supporters never ceases to amaze me.

"They deserve so much better than they've been getting of late. My job will be to make sure the work is put in to make them even prouder to be Rangers fans."

Green took up the position last summer after leading a consortium that purchased the assets of the liquidated Rangers Football Club plc.

And the departing chief executive has already agreed to sell his shares in Rangers to Greenock bus tycoon James Easdale.

Law firm Pinsent Masons will conduct the main investigation. Deloitte was involved in Green's acquisition of the assets of the club and the subsequent share issue, leading some on the board to privately question their independence or whether in fact they would be investigating themselves.

"Rangers International Football Club plc ["Rangers"] has instructed the law firm Pinsent Masons, supported by forensic investigators from Deloitte, to investigate the connections between Craig Whyte and former and current personnel of Rangers and its subsidiaries," said a club spokesman.