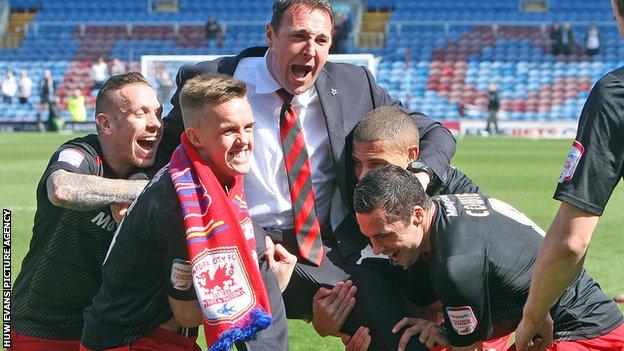 Cardiff City manager Malky Mackay says a lack of egos in his side was a crucial factor in their relentless march to the Championship title.

The Bluebirds won England's second tier for the first time in their history by drawing at Burnley on Saturday.

"This is a group of players who have consistency, a lot of togetherness and a lack of ego that will work for each other," said Mackay.

"To go up as champions is something we're very proud of."

Cardiff have led the division since beating Barnsley away on 24 November. Their advantage stood at 10 points at the beginning of February before a slight stutter allowed Hull City to close the gap to four points by the end of March.

Three is the lucky number

But a six-match unbeaten run since then has proved enough for the Welsh side to be crowned champions with two games to spare.

"We've been there to be shot at since 24 November," said the 41-year-old Scotsman Mackay, who has taken Cardiff to the title in only his second season at the club.

"I'm delighted they've had the strength of character and mentality to actually sit there and be examined for so long and never be caught. That's the mark of a good team."

Promotion to the Premier League had already been secured on Tuesday with a goalless draw at home to Charlton Athletic.

That result took Cardiff back to the top flight after a 51-year absence, having failed in the Championship play-offs in the previous three seasons.

"We've come so close before and to take that extra step it's great to see," said defender Kevin McNaughton, one of only two players who lost the play-off final against Blackpool in 2010 that faced Burnley on Saturday.

"Basically I'm just chuffed for the fans. It's been a bit like climbing Mount Everest to get up for it and to get that point.

"I thought the boys played quite well today considering the celebrations during the week but we got the job done."

Craig Conway gave Cardiff an early lead at Turf Moor, but the home side equalised in stoppage time to snatch a point that moved them four points clear of the relegation zone.

The winger said: "It's an important goal and it obviously gets us the winners' medal so I'm happy with that.

"I'll score two goals all season if it means I get to score one like that."