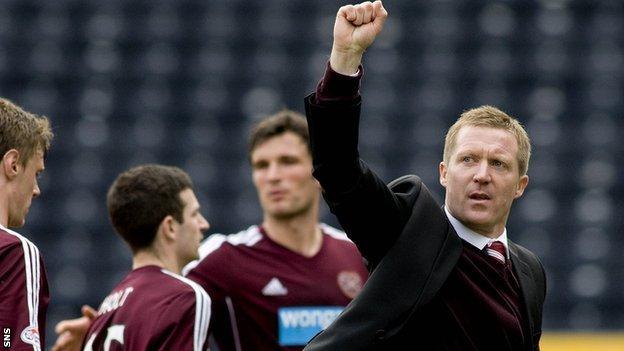 Hearts manager Gary Locke has called for more of the same after his side secured a valuable win at Kilmarnock.

John Sutton's eighth goal of the season proved to be the winner.

Locke said: "I said to the players if we play like that for the rest of the season we'll pick up more points than we'll drop.

"I was really impressed with how everyone battled in terms of going forward and throwing themselves in front of the ball."

It was Hearts' first away win in the Scottish Premier League in 13 attempts and their only victory over Kilmarnock this season.

Michael Ngoo, who was substituted at half-time with a shoulder knock, capitalised on some slack Killie defending early on to tee up Sutton, and the hosts rarely had a look in until the second half, when they staged a late onslaught.

Hearts wingers Jamie Walker and Jason Holt were a constant thorn in the side of Kilmarnock, the former winning a penalty which Ryan Stevenson had saved by Cammy Bell.

"I was impressed with them [Walker and Holt] but it was a great team effort," Locke said.

"We were on the front foot most of the game. Obviously Kilmarnock are going to have a wee spell when they came into it but we defended well and thoroughly deserved the three points.

"Every game's a must-win now. Kilmarnock are the team we're trying to catch so if we can do that it'll be great."

Darren Barr, who has recently been told he will not get a new contract at Tynecastle, played the full 90 minutes for Hearts.

Locke admitted Barr not being offered a deal was probably a financial decision rather than a footballing one.

"Darren's a magnificent professional," he said.

"Obviously everyone knows the financial situation at the club, but I've got no qualms about putting Darren in - I know how professional he is."