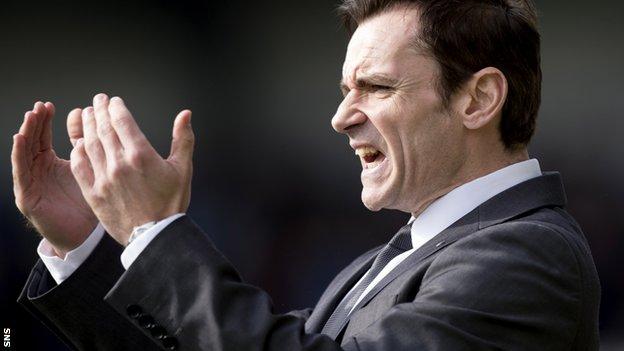 Manager Danny Lennon was left to rue the sending off of St Mirren captain Jim Goodwin after a 2-1 home defeat to Dundee.

"When you analyse it, it's very disappointing," said Lennon.

"He's an experienced player for us and he put himself into a difficult position in terms of himself and the team.

"(Referee) Craig (Thomson) had ran out of patience with him, you could see that."

Goodwin was booked in the first half for a late tackle on Jim McAlister and was cautioned again for barging through Carl Finnigan just a few minutes after an ugly tangle with the same player.

St Mirren had the upper hand when Goodwin was dismissed, with Steven Thompson having cancelled McAlister's opening goal.

"Jim is important in terms of organisation and leadership. When a game is not going our way, he's a big player for us.

"We had a little bit of ascendancy after a fine goal from Steven Thompson and their keeper makes a wonderful save when you think John McGinn is scoring."

"I've got to compliment Dundee on their fighting qualities," added Lennon.

"Hopefully, in our four remaining games, we can learn one or two things from that.

"We've been playing total football in our last four games but we knew it would be different today.

"We knew Dundee would be fighting for their lives and make it a physical challenge for us.

"That was something we didn't match for some reason or other and that's disappointing.

"We want to climb the table as high as we can and we need to put that right.

"Without the correct industry we can be a very ordinary side. Below ordinary in fact."