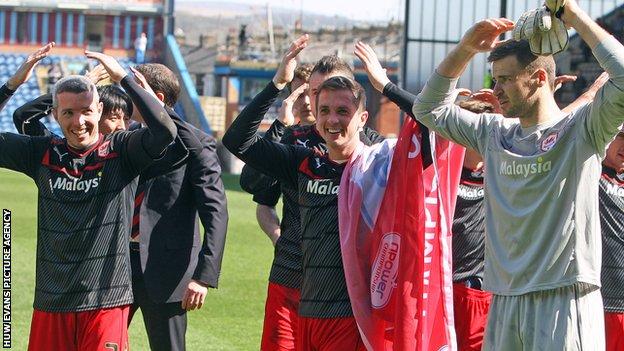 Left-back Andrew Taylor insists Cardiff City will not ease up in their final two games of the season despite winning the Championship title.

Cardiff secured the title following a 1-1 draw at Burnley having already secured promotion to the Premier League.

Malky Mackay's side complete the season at home to Bolton next Saturday and away to Hull the following week.

"The gaffer and the coaches won't let us slip," Taylor said.

"We don't want to go out with a whimper. If we can win both games, great.

"We get the [Championship] trophy next week and it will be even better if we go and win the game before we get the trophy.

I think it's been for me the best week of my career. It's been a fantastic week

"Getting the trophy next Saturday at home, I think it will be another memorable day for everyone involved."

Taylor, 26, wore the captain's armband as Cardiff clinched the title with a 1-1 draw at Burnley.

Craig Conway had given Cardiff a first half lead only for David Edgar to score a 90th minute equaliser for the home side.

Although Cardiff were denied victory at Turf Moor, a point was enough to secure the title and cap off a memorable week.

"I think it's been for me the best week of my career," Taylor added.

"Tuesday night was incredible and I can't describe that feeling. And then to be named champions with a great following, it's been a fantastic week."

And Taylor said: "I think he's going to be a massive player for us next season in the Premier League.

"He got a few elbows and kicks but that goes to show how good he was doing.

"He's showed over the last five or six games, since he got back into the team, how good he can be."