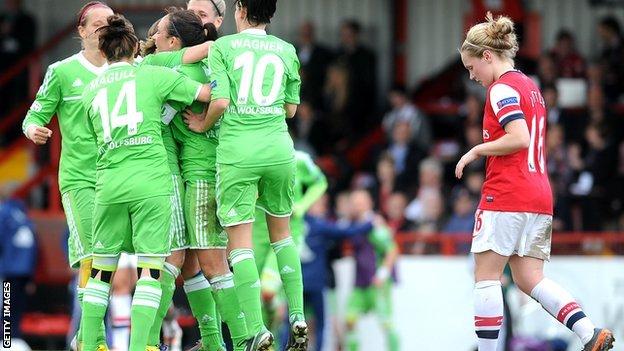 Arsenal were knocked out of the Women's Champions League after losing 2-1 in the second leg and 4-1 on aggregate against Wolfsburg in the semi-final.

Midfielder Kim Little equalised with a low shot, but Wolfsburg captain Nadine Kessler converted a rebound after Emma Byrne had blocked her penalty.

This is the third successive season that the Gunners, winners in 2007, have lost in the semi-finals.

And there were no complaints from recently appointed manager Shelley Kerr, who was in control of a Champions League campaign for the first time.

Arsenal scores are listed first in each match

"I'm disappointed but realistic," said Kerr. "Over the two legs Wolfsburg deserved to go through to the final.

"We didn't play well in the first half and we could have been three goals behind by half-time.

"But after we equalised we started to play a bit and I thought we were in with a right good chance.

"We showed good character in the second half, but Wolfsburg got all the fine details spot-on and they were the better team."

Wagner put Wolfsburg ahead in the 14th minute at the Volkswagen Arena when her looping header struck the underside of the bar and then the far post before dropping over the line.

The home side had already gone close on two occasions and should have wrapped up the tie by half-time.

Wagner then shot against the angle of post and bar as Wolfsburg looked for a killer goal straight after the interval.

The Gunners might have been in with a chance if striker Ellen White had not scuffed a six-yard shot wide three minutes later.

But their fate was sealed when Kessler forced the ball over the line after goalkeeper Byrne had blocked her penalty, awarded for a Little handball.

The Gunners missed the opportunity to contest next month's Champions League final at Chelsea's Stamford Bridge, but have the chance to quickly bounce back as they face Liverpool in the FA Cup semi-final at Anfield on Friday.

Kerr added: "We'll evaluate and move on and Friday's game gives us the chance to put this disappointment behind us and reach a big final."