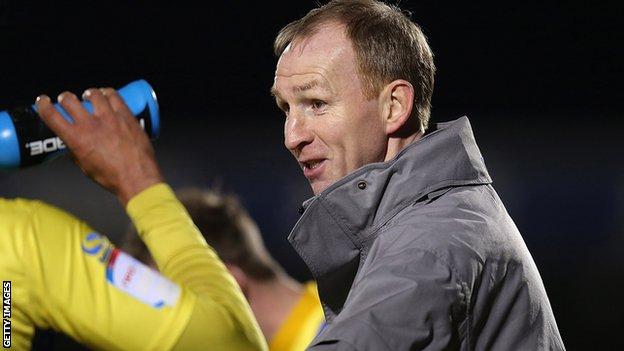 They have the best goal difference of the teams who could still go down.

And with York and Dagenham to play each other, the Gulls can only go down if those two sides draw and AFC Wimbledon can turn around a 16-goal deficit.

We had a fair bit of luck, I have to say, but you take it

Knill felt the performance against Morecambe was not the best by his side since he took charge, but the stakes were high as a defeat would have left them in the relegation places.

"We did enough to get the result and it's a massive three points when you look at what happened in some of the other games," he told BBC Radio Devon.

"I'm really pleased and delighted for the players because they've worked so hard.

"If you work that hard, consistently, then the luck you didn't have before goes for you. We had a fair bit of luck, I have to say, but you take it."

However, Torquay will be without top scorer René Howe for the final game of the season at home to Bristol Rovers.

The 16-goal striker will be suspended after collecting his 15th booking of the season.

"It was always coming and you can't do anything about it, especially with one game left," added Knill.

"We just have to live with it and go into Bristol Rovers without René."