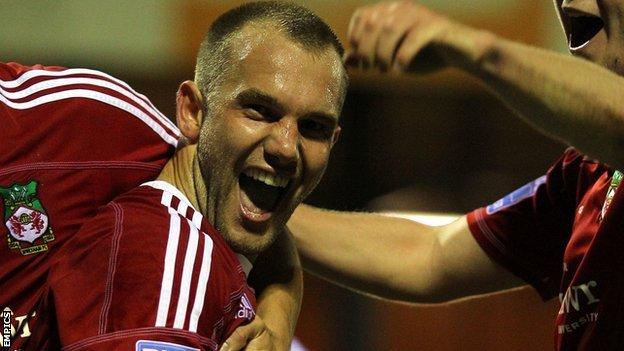 Dave Artell, free to play after his three-game ban was overturned hours before the game, headed Wrexham ahead.

Michael Gash levelled from the spot after the break when Anthony Malbon was brought down by Martin Riley.

After his successful appeal against Saturday's red card at Mansfield, Artell was one of only two Wrexham players in the starting line-up who also started at Field Mill, player-boss Andy Morrell having made nine changes.

Having won 2-1 at the Racecourse Ground just nine days before, and finished the season with a five-match winning run, the Harriers went into the game as the team in form.

But there was always a danger of psychological scars from Saturday's failure to win the Blue Square Bet Premier title and the crowd trouble that marred their 4-0 win over Stockport.

Artell off the hook

Wrexham centre-half David Artell was not expected to play, after being sent off for a high challenge in Saturday's 1-0 defeat at champions Mansfield.

But, having been sent off by an English referee, in an English league game, the decision was overturned by the Football Association of Wales on Tuesday afternoon, just hours before the game.

And, with so many of Wrexham's first-choice selections back in action, apart from an early block by home keeper Chris Maxwell to deny Malbon, it was the Red Dragons, beaten in at this play-off semi-final stage in both the last two seasons, who carried the first-half threat.

Ormerod was denied three times by keeper Danny Lewis - the first of them a fine diving save from a fierce left-foot shot. There was also a big handball shout in the penalty area against James Vincent, and Mickey Demetriou came up with a great last-ditch block in a scramble.

But it was Demetriou who was at fault a minute before the break, being turned by the ageless Ormerod, who clipped a neat chip to the far post for Artell - a Wembley play-off winner with Crewe a year ago - to power home a header.

It could have been 2-0 for Wrexham straight after the break when Johnny Hunt fired just over from Ormerod's cross. But, instead, it was 1-1, Malbon going down under a challenge from Harriers old boy Martin Riley before Gash kept his cool from the spot, driving the ball low straight down the middle.

With the lively Martin Devaney on for the visitors, chances then came at either end as Kidderminster were rescued by a superbly-timed tackle from skipper Kyle Storer on Ormerod, before Maxwell went low to his left to deny Danny Jackman.

But, with five minutes left, the home side won the night.

Gowling was adjudged to have brought down Ormerod with a last-ditch challenge and Ashton sent Lewis the wrong way to steer home the winning penalty - and hand Steve Burr's Harriers a first defeat in 11 games.

"That's a great advert for our league - two teams going at it full tilt, head-to-head against each other.

"I thought it was a really good game and it was quite nice to come out on top.

"I don't know where we stand because we're used to being two or three down at this stage.

"We're in uncharted territory so it's a better feeling than in the last two years."

"I'm sure come Sunday our fans will be vocal again and get behind the team and that we can turn this defeat around.

"First half, we didn't come out the traps. We looked a bit leggy. We gave the ball away cheaply. Our passing wasn't as it has been and we looked off the pace a little.

"Second half we got hold of the ball and created a lot more. I was lot more pleased with our performance."